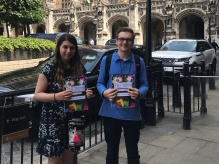 Jenny and Gabriel deliver the report to Parliament 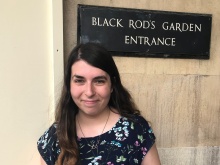 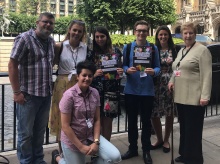 Two Fixers took the voices of autistic young people right to the heart of government on Thursday 5th July, with the launch of a major Fixers report on autism.

Gabriel Ledson and Jenny Brooks impressed members of the House of Commons, House of Lords and the National Autistic Society when they talked about the things they want to see changed.

They called on the decision makers to listen to the voices in the report, entitled Feel Happy on The Spectrum; Young Autistic People Speak Out, and use them to improve the lives of people living with autism.

‘It was really engaging and helpful and I felt like our points got listened to,’ said Gabriel, 18, from Southport on Merseyside.

‘I hope this report helps more people understand autism so we do not get stereotyped and instead we get the support.’

The report pulls together the voices of young people living on the spectrum who attended a one-day Fixers event in London at the start of the year.

They discussed the problems they face in five key areas of their lives; home, school, health, employment and the media. The young people then proposed solutions and came up with a series of recommendations to make life easier for young autistic people.

Baroness Angela Browning, who hosted the event at the House of Lords, said: ‘We are very pleased to receive this report but also to hear first-hand about Feel Happy on The Spectrum. We spend a lot of time hearing about what people need but it is encouraging to have something from young people on the spectrum.’

Jenny, 22, from Derbyshire, spoke about how she felt after being diagnosed with autism when she was 13 and called for a shift away from stereotyping people on the spectrum as geeks.

‘It was a really good platform to talk about autism and how people can be more aware,’ she said after the event.

Dame Cheryl Gillan, who chairs the All Party Parliamentary Group on autism, also attended the launch and immediately afterwards took the report in to a debate in the House of Commons where she said to MPs: ‘Feel Happy on the Spectrum; Young Autistic People Speak out has already left an impression on me.

‘There were two very impressive young people, Jenny and Gabriel, who talked through their experiences. I went into the report to look at their recommendations and they include something we would all like to see; that there is more education in the work place on autism.’

To read the report visit our dedicated microsite here.