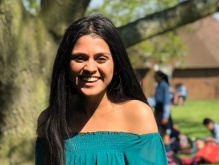 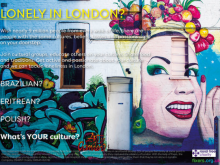 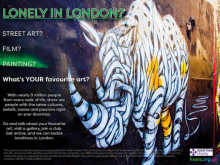 The posters will be shown on the London Underground

Have you ever felt lonely and not known who to turn to?

Dhra Gandhi, along with a group of friends, spends time helping patients at the Royal Free Hospital in Hampstead, North London.

They were shocked at how lonely many of the patients were, so have designed a series of eye-catching posters which they hope will get people talking.

‘We found that many of the patients feel really lonely sometimes,’ said Dhra, aged 18, from Wembley.

‘So we thought we would do a project about loneliness and how it relates to our own lives, because as teenagers we do sometimes feel quite lonely even when we have a lot of friends.’

The A-level student, who hopes to study medicine, wants people to talk more openly about how they are feeling.

‘I have felt lonely myself sometimes,’ she said. ‘I have good friends but sometimes I don’t know whether to tell someone about a problem I might be having in my personal life or at school – because I don’t want to feel like I am burdening them with my problems.’

With the help of Fixers, the group has designed a series of eye-catching posters titled Lonely in London? featuring topics such as food, street art, music and diversity.

‘The idea is to get people talking to each other, even to strangers,’ Dhra added. ‘Making people more open to having conversations with people they don’t know.

'It would be good to find people not your age or from really different backgrounds. To see where the conversation might go.’

The group is hoping the posters will feature on Tube trains across the capital.

‘People sit on the Tube in complete silence,’ she said.

‘You don’t really talk to anyone. We’ve put our posters up in school and it got younger years talking to older pupils. It’s a good way for people to become friends rather than just acquaintances.’

This project was funded by the Royal Free Hospital. 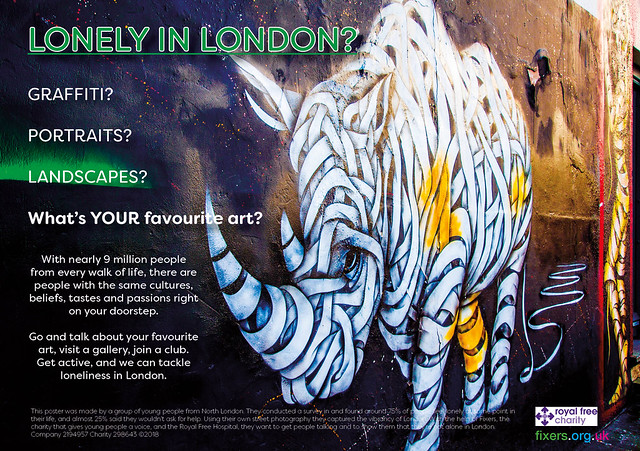