A group of fixers 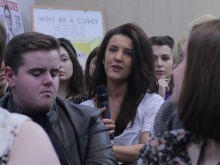 The panel debated the findings

Scores of young people gathered in London this week to talk about body image.

The Fixers came from across the country and spent the day discussing how body image affects them at school, home, in the workplace, accessing healthcare and in the media.

They presented their findings and solutions during a question time style debate to an audience of industry professionals.

The event was co-presented by Fixer Shannon Finan and actress and body image campaigner Melissa Johns.

'This has been an incredible event,' said Melissa. 'To be in the presence of young people who have a platform and a voice to talk about something that is hugely important, and affects so many people, has been truly humbling.

'It has been a wonderful experience and very solution focused.'

The event, at 15 Hatfields in London, was the culmination of numerous body image workshops with girls funded by the Department for Digital, Culture, Media and Sport, through the Tampon Tax Fund.

A number of young men also came along to share their experiences and ideas about body image, funded by Wellcome Trust.

It brought together young people who were passionate about changing the perceptions of body image.

On the subject of education, it was felt not enough support is offered to pupils at school and more should be done to teach children about difference and changes the body experiences during puberty.

Fixer Onyx Uwandulu, 17, said: ‘You spend more time around teachers than your parents. They are our role models. As a young person a lot of your emotions are disregarded.

‘That is really harmful so you isolate yourself from everyone. When you do reach out to a teacher it should be approached sensitively. There should be more counsellors on site to help.’

Many young people talked about the language parents used at home and how casual talk of dieting for a ‘summer body’ can give confusing messages.

The media was criticised for a lack of diversity on screen and the Fixers suggested more could be done to legislate against this. They want to see disclaimers on photoshopped images in magazines and more positive role models in the media.

It was when discussing health services the young people felt the most passionate. Many described a disconnect between physical and mental health services and there being too much of a focus on numbers, including BMI and calories.

They want to see a more holistic approach to healthcare, where the mental and physical needs are tackled as one.

‘Body size and shape is a very individual thing,’ said Kiki Nsonwu, 19. ‘Too many books say what is right and wrong; people do not look at the individual.’

When accessing employment the young people felt there were still sweeping assumptions made by older generations about gender specific roles. They want to see body image incorporated into the Discrimination Act and more training in the workplace about acceptance of different looks.

Dr Emily David, lead clinical psychologist at Hampshire CAMHS, attended the event and was impressed with the comments and solutions reached by the young people.

‘Raising awareness, promoting understanding and hearing from young people directly is a really powerful platform for change,’ she said.

‘They are working towards inclusivity, acceptance and better outcomes for young people. I have come away inspired and motivated to keep fighting on.’

Research from it will be compiled into a report. This in turn will be delivered to decision-makers to improve the future for young people.

The Body Image Fix was part of the Feel Happy Fix Series run by Fixers, which brings together young people who are campaigning on issues affecting their well-being.