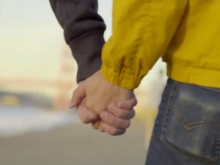 Dean wants to inspire people to 'come out' to their communities 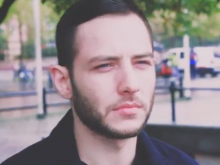 A still from Dean's film 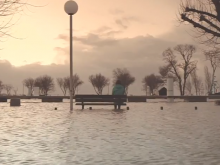 A Traveller wants to give other young people the confidence to ‘come out’ regardless of the overriding opinion of their social community.

Dean, whose real name has been changed, has grown up in a Gypsy community and wants to find the courage to tell his family and friends he is gay. He hopes in doing so he will inspire others to do the same.

‘I knew I was gay from an extremely young age, I’ve never known anything else,’ explained Dean, 25, from Greater Manchester. ‘I wish I had done it when I was younger, and that thought gets me down.

‘Growing up everyone joked that I was gay so I know some people wouldn’t be surprised.

‘No one wants to be associated with ‘gays’ in the gypsy community and the way people speak about it would put anyone off coming out - they aren’t supportive.’

In Gypsy communities ‘everyone knows everyone’ and Dean is concerned about dealing with abuse on social media and via private messages.

‘If I were to come out today it would only take one person to take a picture of me and put a caption about me being gay and it would go around on WhatsApp, Facebook and other social media – the news would travel fast.’

Having never had a romantic relationship, Dean believes it’s time to start living and wants the opportunity to be with someone without having to hide it from his family.

‘Sometimes families disown their children and want nothing else to do with them,’ explained Dean.

‘My family think I’m straight so I have to act as that person and not slip up about being gay.

‘I have to play two characters – the straight me and the gay me.’

Despite Dean’s struggle to open up about his sexuality, he is proud to be part of the Gypsy community and believes attitudes are slowly changing.

‘In this day and age the attitudes towards gay people are still bad but not as bad as they were five or 10 years ago,’ Dean added.

‘I don’t think people want their sons and daughters committing suicide because they’re gay. I think people are a little bit closer to understanding but there’s still a long way to go.’

With the help of Fixers, Dean has produced a film to inspire other young people who are gay to find the confidence to open up about who they are.

‘I am going to come out, I just don’t know when – it will be soon as I can’t wait any longer.

‘Even if my campaign only helps one person – that will be enough.’