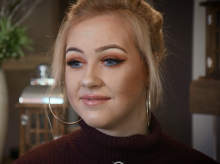 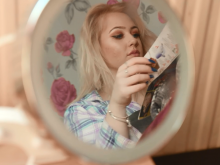 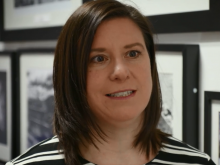 'When I used to look in the mirror and see myself, I would give myself the most negative comments. Like I look horrible or I shouldn’t be wearing this.'

A couple of years ago, 19-year-old Chloe Neesham became super-critical of her own looks despite being a runner-up in beauty pageants.

The teenager, from Workington in Cumbria, says she was influenced by pictures in magazines and on social media.

She has now teamed up with Fixers to get her message out to other young people that they should be positive about their body image and accept themselves for who they really are.

Her story was broadcast on ITV News Lookaround on March 8.

‘When I looked through those magazines I would feel jealous of the models and I would tell myself I wish I looked like that,’ she says. 'I wish I was her. Then I came across all these fitness models on Instagram.

'Perfectly toned abs, toned legs and everything. And I was thinking – I want to be that person.’

She says: 'We know that one in four 7-year-old girls have considered dieting so we know body image is a significant issue across all the age ranges.

'Especially with social media, there’s a lot of emphasis on young people to fit in. It’s about peer influence, about being left out – how many likes you get on a selfie. So we need children and young people to love who they are and love each other as well.'

Chloe adds: ‘I turned this around by stopping comparing myself with others. My main message would be – just love yourself. Enjoy your life and don’t listen to any negativity.’