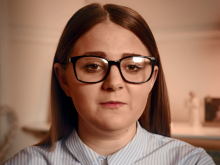 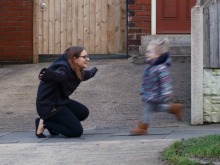 Lauren with her daughter Evie 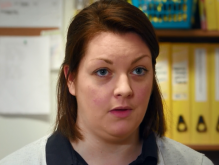 ‘As much as I absolutely love being a mum now, things didn’t start off too great when Evie was born.

'My mood just went from bad to horrendous. I had lost all hope and I made the decision to take my own life. We are so lucky because it could have ended so differently.’

After being diagnosed with post-natal depression following the birth of her daughter 4-years-ago, Lauren Murchison is encouraging other young mums not to bottle up their emotions.

The 23-year-old from Carlisle shared her story on ITV News Lookaround.

‘There hasn’t been a day, since Evie has been in my life, that I haven’t loved her. But at that time I never felt like I was enough to be a mum.

‘I just didn’t feel mature enough. I didn’t speak to anybody. I was far too embarrassed.

‘Something that made it worse for me was feeling so alone. I want to get people talking more about post-natal depression.

‘I want to get the message out there that it doesn’t just affect mums, it affects dads, mother-in-laws, grandads. It affects everybody.’

Katherine Dalgliesh, Chief Executive of The Happy Mums Foundation, appears in the broadcast film in support of the campaign.

She says: ‘We know from national statistics that up to 20 per cent of women will be affected by some kind of maternal mental health problem in pregnancy or in that first year after birth.

‘But those are actually only the cases that are reported.

'And it may be something to do with stigma, it may be a reluctance to admit that they can’t cope, whatever the reasons that are stopping them from seeking help, we suspect there are many more women out there who deserve that help.’

Lauren adds: ‘The main thing I want to achieve by doing this is, even if it’s only one person, that they find comfort and help in what I am saying.

‘My message to anybody going through this right now is to seek some form of support and just talk.