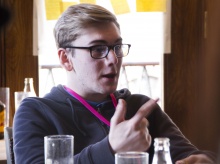 Autistic young people have called for a better understanding of the disability, at an event hosted by Fixers this week.

The group spent the morning discussing the challenges they have faced before addressing an audience of around 80 people about what needs to be done to improve their lives.

Practitioners and stake-holders were given the chance to put questions to the panel of young people in a ‘Question Time’ style debate hosted by TV celebrity Amy Willerton along with Fixer and author Alex Lowery.

‘If everyone had just 10 per cent of an understanding of autism it would completely change the lives of young people on the spectrum,’ said Amy Willerton, whose brother is severely autistic.

During the debate in central London, young people were asked what they would like to be different in five key areas: school, work, health, media and the home.

Talking about health, the panel shared experiences of families fighting for a diagnosis and called for better post-diagnostic support.

Jack Welch, a Fixer from West Dorset, said: ‘Getting the diagnostic appointment is a battle in itself. Afterwards there needs to be support and not a cliff edge.’

Jessica Benton told the audience, which included key members of the NHS, there were great examples of healthcare professionals working to improve the lives of young people with autism. ‘I have heard of amazing integrated work in the health service,’ said the 20-year-old from Birmingham. ‘There needs to be better communication between the sectors.’

On the subject of education, the young people spoke of the challenges they faced in noisy classrooms with teachers who sometimes had little training on how to work with people on the autistic spectrum. They also discussed the problems many autistic young people face when leaving school without any qualifications.

‘I was called unteachable and I found that really hard,’ said Emma Riley, aged 20, from Chorley, Lancashire.

‘I found it really hard and frustrating to get into university because I had no GCSEs.’

When discussing their home lives, the panel agreed this was usually the one place they all felt safe and supported. However, they called for parents and siblings to be offered more support.

‘Family is one of the longest relationships you will have in your life so it is hugely important,’ said Jenni Brooks, 21, from Derbyshire.

‘It is important they get support as well as the people on the spectrum.’

With regards to work, the panel agreed it was difficult for young people on the autistic spectrum to enter the workplace. They described feelings of unease over whether to disclose their disability to potential employers and difficulties knowing what jobs to apply for.

Gabriel Ledson, 18, who works at one of the top restaurants in the North West, had this message to employers: ‘Don’t put us in a box of what we are and are not capable of – understand my autism, as opposed to understanding ‘autism’. Give us an interview and a trial; if you don’t like us after a trial, well, we’ve had a fair run at least.’

In the media, young people would like to see a broader portrayal of autism and called for more celebrities and role models on the spectrum.

‘This event is so important because younger people get to have an authentic voice,’ she said.

‘They are saying what they need to say in a safe, supportive environment.’

The event was supported by Wellcome Trust and research from it will be compiled into a report. This in turn will be delivered to decision-makers to improve the future for other young people on the autistic spectrum.

The Feel Happy on the Spectrum Fix is part of the Feel Happy Fix Series run by Fixers which brings together young people who are campaigning on issues that affect their well-being.