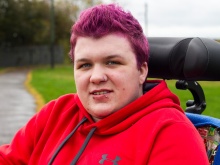 Luke Murphy was diagnosed with EDS in 2016 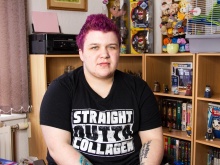 Luke has been in a wheelchair for two years 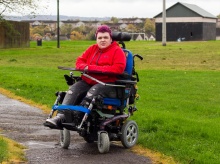 A young North Lanarkshire man is speaking out about a rare genetic condition that causes him significant pain on a daily basis.

With Fixers, he has made a film to educate the public about long-lasting illnesses in young people, and how his condition in particular impacts him.

‘I want people to be aware of how chronic illness can affect people’s day-to-day lives,’ says Luke, from Bellshill.

‘It’s also important to me to show others who may have a disability that it doesn’t make them any different and that they can have their voice heard too.’

Luke was 19 when doctors first suggested that he may have EDS, and was formally diagnosed in February 2016.

There are varying forms of the illness, but the type Luke has causes hypermobility which means his joints are much more flexible than they should be.

It means he can’t lift anything heavier than a pint of milk, not even a kettle to make a cup of tea.

Even holding a pen poses a challenge because his fingers bend backwards instead of forwards.

‘EDS affects me in every single day-to-day task I do,’ explains Luke.  ‘Because of it, I am a full-time wheelchair user which means that a lot of activities aren’t available to me because of a lack of access.’

As well as being incredibly painful, the complex condition means Luke suffers from chronic fatigue and gastric issues, can be slow to heal from cuts and bruises, and has battled with his mental health.

‘I’ve suffered long periods of low mood and a lot of social isolation due to my condition,’ he says.  ‘The inability to get out and keep up with others my age has drastically affected my confidence and self-esteem.

‘I’ve had periods of severe low mood and thoughts that I couldn’t continue with my life living with this condition. But thanks to my very supportive family, friends and partner, I’ve overcome that and no longer feel any held back due to my condition.

‘Now I just want other people to understand what life is really like for young people with chronic illnesses like mine, in the hope they may be more understanding towards us.’

To get his message across, Luke is planning to share his film on social media.

He especially wants to highlight ‘invisible illnesses’ and draw attention to the fact that it might not always be immediately obvious that someone is unwell, especially if they are young.

‘People often don’t understand that a young person might have a very genuine reason for needing to use a priority seat on public transport or a disabled toilet – and abuse them as a result,’ says Luke.  ‘It’s unhelpful and makes our lives much more difficult than they already are.’