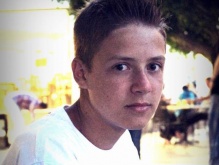 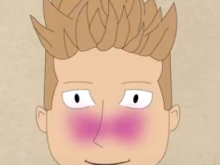 The film shows the symptoms of lupus, which include a rash over the cheeks and nose 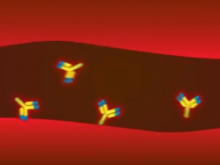 After hearing about the autoimmune disease lupus on a popular TV show, a teenager from Folkestone has launched a campaign to shine a light on the illness.

Tomasz Skowron has created an informative animated film with Fixers in a bid to increase understanding of the condition.

‘The first time I came across it was watching the TV show House – an American medical drama starring Hugh Laurie,’ says the 17-year-old.

‘One of his most famous lines was, "it’s not lupus", because of the difficulty in diagnosing it.

'It made me realise that there must be a lot of people out there who suffer from the condition and I wanted to learn more about what life was like for them.

‘I researched it and looked at a number of websites which feature stories from people about how they deal with various forms of lupus.’

Reading these stories made Tomasz, who plans to become a doctor, determined to shine a light on lupus and he decided to team up with Fixers to take action.

‘I’ve made a film to try to encourage support for the condition,’ he says.

‘My aim is to get people to develop a deeper understanding of what it is and be more patient and sympathetic towards those suffering from it.

The film explains the treatments, causes and symptoms of lupus.

‘One of the most frustrating symptoms is what’s known as ‘lupus fog’, which is the name given to the cognitive impairments that occur with lupus,’ he explains.

‘These include concentration and memory problems, and difficulties expressing yourself. People can lose patience with those experiencing a lupus fog episode.’

Tomasz, who is studying A levels in biology, chemistry and maths at Dover Grammar School for Boys, plans to share his film on social media.

‘I feel if more people understood lupus it could have a positive effect on the lives of those with the condition,’ he adds.

‘Be patient with those affected.’