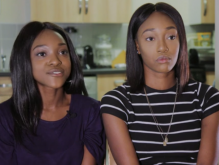 Jessica (left) wants young carers to look after themselves 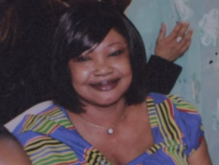 Jessica started caring for her mum (pictured) when she was 11 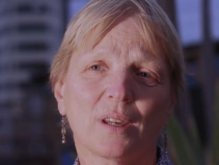 Vera Beining from Action For Children supports the campaign

'We were a normal, happy family until our mum had a stroke in 2009.

'When she came back from hospital our lives changed instantly. We had so much more responsibility and we were taking care of our brother, the house, our mum and ourselves.'

Two sisters from Hackney, whose mother's poor health meant they took on adult responsibilities at a very young age, are urging other young carers not to sacrifice their own lives in the process of helping their families.

Lead Fixer Jessica Ofori-Forbes, 20, and her 22-year-old sister Sandra, have enlisted the help of Fixers to launch a campaign encouraging young carers to look after themselves.

They told their story on ITV News London on December 11th.

Jessica was 11 and Sandra was 13 when their mum had her stroke.

A stroke is a serious life-threatening medical condition that occurs when the blood supply to part of the brain is cut off.

People who survive a stroke are often left with long-term problems caused by injury to their brain.

'Any type of task that seems so trivial, like going to the shop or quickly ringing up a doctor or going to get a prescription, became our responsibility,' explains Jessica.

'Social services organised for a carer to come and help us, but they would only be there for about an hour a day.'

Sandra adds: 'It was a lot to take on. I think it's important for young carers to try and get some extra help for the adult they're taking care of, just to take a little bit of the burden off themselves.'

Both Jessica and Sandra, who are being supported by Action for Children's Hackney Young Carers, have gone on to study at university.

They are encouraging other young carers not to sacrifice their education.

'It’s very easy when you’re at school to just be thinking, "I want to go home and make sure everything’s alright,"' says Jessica.

'Lots of young carers don’t complete their education. You need to keep in mind that you are no good to anyone if you’re not educated.'

'We do a lot of work with the older ones, many of whom put their families first. But if you do go to university you'll end up with a better paid job and you'll support your families better.'

Jessica adds: 'What we hope is that any young carers watching our film will feel encouraged and motivated to fulfil whatever it is that they want and that they understand it’s very important to take care of themselves as well as their families.'