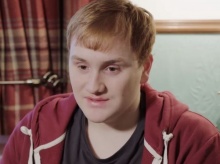 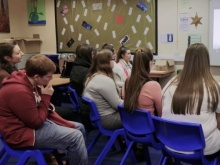 Andrew showed his Fixers film to students at his old school 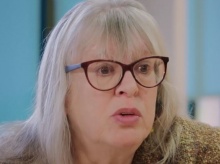 'The start of secondary school was really difficult. I didn’t like it at all and I was frightened to go every day.

'Some people bullied me. In the later stage of Year 7 these two boys would push me down the stairs and started hitting me.'

Andrew Hughes, 24, is working with Fixers to improve young people's understanding of autism after he suffered bullying at school.

He's created a film explaining five key points about living with autism - which can cause difficulties with social interaction and communication.

His Fixers campaign was featured on ITV News Lookaround on December 7th.

'My Fixers project is aimed at eight to 18 year olds so they can understand more about autism,' he says.

'I struggle communicating so I don't really like to speak on the telephone.

'Around one in 100 people have been diagnosed with autism. There are probably more, we could be looking at two in a hundred,' she says.

'People on the autistic spectrum become isolated if we don’t understand them.

'We’re losing out on really talented people in society and good friends, but we are also leading people into mental health problems, isolation and loneliness.'

As part of his campaign, Andrew took his film into his old school and showed it to students there.

He says: 'I’m delighted with their reaction, they were really thoughtful at the end and said "thank you and well done".

'It's a good outcome. I hope people can watch my film and understand more about autism.

'Don’t bully people with autism, be friends with them and be more welcoming.'