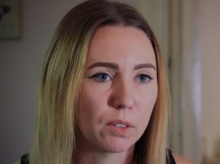 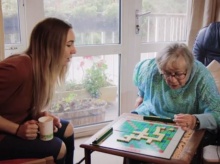 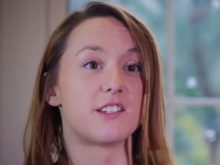 'Because there’s such a massive age gap young people don’t think they’re going to have a lot in common with older people. But the way I see it is that they were young once themselves.

'They've been through different things that we have yet to go through ourselves and they can offer you advice and be your friend.'

Ashleigh Parker, 25, is encouraging young people to make friends with members of the older generation.

She has made a film with Fixers to show that young people often have more in common with older people than they might think.

She told her story on ITV News Meridian (East and West) on December 7th.

'My mum worked at a care home when I was around 17. I found I really enjoyed the company of the older people,' says Ashleigh, who lives in Brighton.

'I now volunteer for a neighbourhood care scheme and I’ve been seeing various people over the years.

'When you talk to an elderly person you realise how they made the most of what they had and they’re so appreciative of it. It does make you see things differently.'

She says: 'Isolation is one of the really significant things that impacts on older people's mental health and make them feel quite low.

'It's really great that Ashleigh is getting out there and encouraging younger people to befriend older adults.

'When they have someone come and visit them it definitely lifts their mood. Both parties get a lot out of it.'

Ashleigh adds: 'I know it’s sounds like such a cliché when people say "making someone happy makes you happy" but it's true.

'When you can genuinely see the impact you’ve made and see that you’ve made that person's life just that little bit better,  it's such a good feeling.

'That’s what keeps me going back and that’s what so beneficial – it makes you feel so good.'