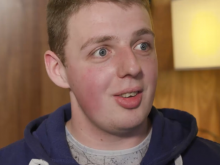 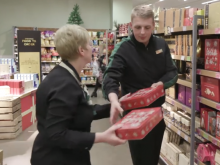 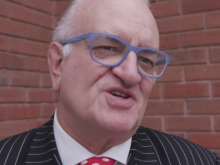 'For the best part of three years I stayed in bed. I didn’t feel there was any point in going out into the world and trying to achieve anything. Looking back now I can say I was definitely depressed.

'My weight increased  because I wasn’t going out in the first place. No one had to see me so I didn’t have to bother about my how I looked. At my worst I was 24 stone. I had no self-worth.'

After leaving education without any qualifications or employment, Nick Walker struggled with his self-esteem.

Now aged 23, he has turned his life around and joined forces with Fixers to help young people in a similar position to find their value again.

He shared his story on ITV News West on December 7th.

He says: 'I was diagnosed with epilepsy at the age of five. Because of my epileptic fits I had to leave school.

'I was given a tutor for three hours a week but I was removed from my friends and any social interaction, so I came to the conclusion that there was no point in learning anything.

'I’ve turned my life around now and I want to go out and help other people too.'

Nick, who lives in Gloucester, says that volunteering helped him to gain confidence again.

'It started with being encouraged to go on a young person’s course for the unemployed run by Young Gloucestershire [a charity that supports disadvantaged young people],' he says.

'It was only when I joined that I realised I had something to give to the world,  I had self-value again and it was that kick that drove me on to the path of wanting to do more.

'I joined Marks & Spencer on their volunteer programme. I packed shelves, I talked to customers and after a short time I was offered a part-time job which has now gone on to full-time job.

'Through work I have a discovered a desire to socially engage with people, I realised I can do more for them and get something back from it which just feels amazing.'

Ian says: 'I think young people have a difficult time at the moment because jobs are restricted.

'Looking at what Nick’s done, I think volunteering is a great way for someone, who thinks of themselves as perhaps a little disadvantaged, to get into the world of work. What’s important is the confidence that volunteering gives you.'

Nick hopes his campaign will help young people who aren't in education or employment.

He adds: 'I hope to show that life isn’t as bleak as they may think.

'Volunteering, education, work, just getting out in to the community, can actually give them self-motivation to want to do more.'