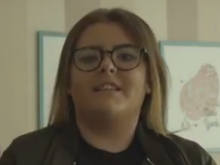 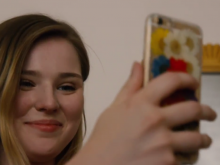 A clip from Ffion's film 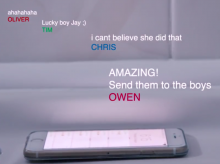 Whether it’s taking that stunning selfie or perfect holiday photo, we’re constantly giving the world a snapshot of our lives.

But a Swansea teenager is urging young people to be wary of taking things too far and is warning of the dangers of sexting.

Ffion Carter, 17, has created a short film with Fixers encouraging teens to think twice before they hit send after a naked picture of a girl she knows was shared amongst countless people.

‘It was a few months ago now,’ says Ffion. ‘She sent the picture to a boy and he put it on a group chat.

‘She was devastated and I felt really bad for her.

‘People don’t always realise that what they share can have really damaging consequences if put in the wrong hands.’

The film shows a young woman who is coaxed into sending a nude picture of herself in the shower to a boy, who then shares it with his friends.

The central message of the film is 'one decision can affect the rest of your life, think before you share'.

Ffion and her team plan to show it in an assembly at their school.

‘I love the film. It’s really simple yet so effective,’ she adds.

‘This is a big problem amongst people of our age and many don’t realise that it can get out of hand very quickly.

‘Our aim is to encourage people to think before they share because you never know where something can end up.’