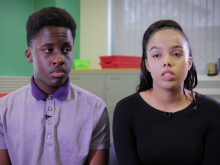 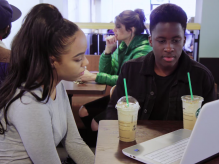 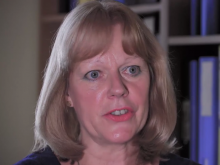 Jill Roberts, the CEO of MIND in West Kent

'We need to encourage people to think differently about mental health.'

Faith Peddie, 18, is using her own experience of feeling unable to open up about her mental health issues to take action to help others.

With her friend Michael Nyazika, 17, she has joined forces with Fixers to  highlight the importance of looking out for each other's mental health.

As well as reducing the stigma that still surrounds mental health, Faith says: 'We want to to make people more aware of the symptoms and signs that people don't really pay attention to.'

Together Faith and Michael, who both live in Sittingbourne, have made a film with Fixers to get their message across.

'We hope the film will make other teenagers think and be more sensitive to those in their classes that may be suffering from anxiety, depression and other mental health issues,' adds Michael.

A story about their Fixers campaign was broadcast on ITV News Meridian East on November 9, 2017.

Faith explains the story behind the film: 'On the surface our film is about a love story between two characters and everything appears normal and they're just enjoying themselves as teenagers.

'But it turns out in the end that one of the girls was suffering from a mental health illness and the other individuals within the friendship group were unaware of this.'

Watch their Fixers film below.

Jill Roberts, the CEO of MIND in West Kent, is supporting Faith and Michael's campaign.

'This film is a very powerful way of saying look out for young people who are perhaps separate, looking unhappy or not engaging in the way others are,' she says.

Faith hopes the project will make people feel they can talk more openly about their mental health issues.

Opening up about a mental health problem is not something to be ashamed of, she says, and adds: 'It isn't a bad thing, it's something that can get better even though you think it might not'.

This project was funded by the Wellcome Trust.