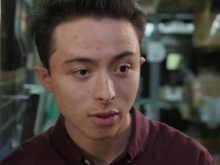 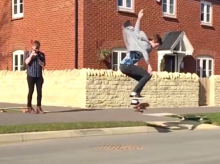 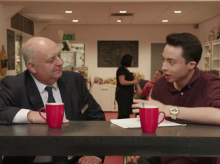 'Brackley is a very lovely town. It’s very pleasant, very quiet. But for teenagers it can be a little bit boring.'

With the help of Fixers, Tian Franklin, 18, is leading a campaign to get a skatepark built in the old market town of Brackley in Northamptonshire.

His story was broadcast on ITV News Anglia on November 9.

'There’s plenty of facilities for little children – swings and slides and so on,' says Tian. 'But there’s nothing for older kids and teenagers. A skatepark would be perfect!'

Tian knows he has to combat negative views about skaters if his group are to be successful.

He has also been researching his facts with local skateboard manufacturer Adam Wood, who told him that when a skatepark was constructed in Dorchester, the local police recorded a 45 per cent drop in anti-social behaviour.

Tian says: 'Skateboarding has a false perception about it – that it increases crime and gives teenagers more reason to be against the community. When actually skateboarding decreases crime.

As part of his Fixers campaign, Tian led a delegation to the town council to call for a skatepark to be built.

'A group of us went to the town hall to get our points across,' he explains.  'The councillors were very impressed because they said to us that they had never seen anyone from the public turn up in this way, and the fact that the first people to do so in force were teenagers and children, was absolutely amazing.'

'I was really impressed by the support the group had gathered,' he says.

A feasibility study looking at aspects such as noise and light impact is being carried out before any plans get the go-ahead.

'It should be a really good opportunity for the town to get what it's much-needed for a long time,' added Cllr Morrell.