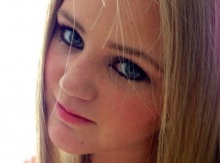 Meghann Gearing has had epilepsy since she was a baby 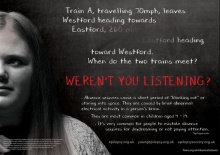 She hopes her poster will help teachers to understand

Sometimes, when she’s in her classes, student Meghann Gearing, 21, gazes blankly into space, ignoring her teachers. But that doesn’t mean she’s daydreaming.

Meghann suffers from a form of epilepsy which means she’ll suddenly lose awareness of her surroundings, for minutes at a time. Afterwards, she can feel vague and confused. She says it’s hard to concentrate when someone keeps pressing life’s fast forward button…

‘The episodes are called absence seizures,’ explains Meghann, a student from Hove in East Sussex. ‘And this condition just isn’t understood enough by schools and teachers.’

So she’s teamed up with Fixers to create a poster about the condition in order to educate teachers and others who work with children.

Epilepsy is a condition where bursts of electrical activity in the brain affect the sufferer. Tonic Clonic seizures - once called grand mal - cause convulsions and unconsciousness.

But absence seizures - formerly called petit mal – are less well known. Sufferers ‘blank out’ for a short period of time, often staring vacantly into space as if daydreaming. 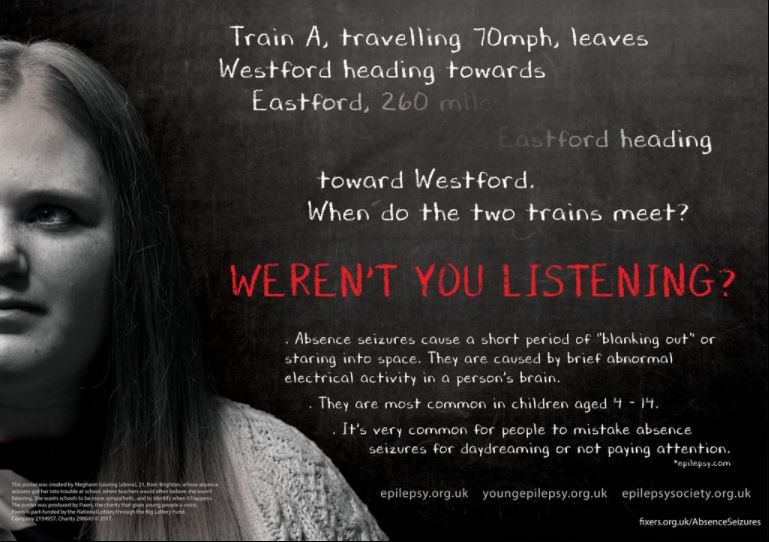 Meghann had her first seizures as a baby and by age six, was suffering up to 30 per day. The relentless seizures were seriously blighting her life – and also causing damage to her brain.

So in 2002, six-year-old Meghann underwent brain surgery, where surgeons removed the small, damaged part of her brain which was triggering the abnormal electrical activity.

In 70–90% of cases, this operation cures the seizures – but unfortunately Meghann suffered from complications. She has been left with permanent memory loss, limited vision and difficulties with reading and communicating. And although they are much less frequent, Meghann still has daily absence seizures.

‘I wanted to create a poster because lots of people don’t know about all the types of epilepsy – my type especially,’ Meghann says.

She particularly wants to educate teachers, due to her own experiences at school.

‘Sometimes when I was in a seizure, teachers shouted at me, telling me to answer them,’ she remembers. ‘One took me out of the class saying, “Why aren’t you listening?” I told her I’d had a seizure, and she still ignored me.’

‘She’d come home feeling the teachers had picked on her, which she found really hard,’ her mother Karen agrees. ‘They’d say Meghann wasn’t paying attention when actually she’d missed parts of the question, or whatever they’d been talking about, because of a seizure.’

‘I’d love teachers to understand what it’s like,’ says Meghann. ‘That’s the idea behind the poster – to show that it’s like you’re watching a film and somebody keeps fast forwarding it. You keep missing chunks of what’s going on.’

Meghann will now distribute her posters to local hospitals, schools and GP surgeries. And she wants teachers to support students with absence seizures, and not make assumptions.

She hopes her posters might also tackle another common assumption - that if young people seem vague or struggle to communicate, it’s because they’re drunk or on drugs.

After each absence seizure, Meghann will be muddled and confused for a while. As a result, she can’t drive, and cooking or going out in public alone can be tricky.

So she wants teachers, and the general public, to know: ‘We can’t help it if our brain just shuts off for a few minutes. It’s not something that we do or make happen. We can’t stop it from happening. And we’re not just being naughty or daydreaming!’