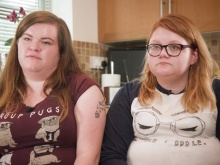 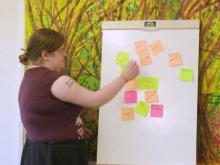 Nikki has set up a peer support group in Croydon 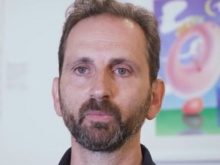 Richard Pacitti, director of Mind in Croydon, has praised the campaign

'When I opened up about my mental health issues it was scary, but once you talk to one person and they don’t treat you like you’re weird, you feel a lot better about yourself.'

Robyn Wimble, from Croydon, wants to encourage young people to open up about mental health issues.

She is concerned that people often feel scared and embarrassed to tell friends and family when they are struggling with their mental health, so that they end up feeling isolated and alone with their problems.

She told her story on ITV News London on October 5.

The 22–year-old, who is a student, has suffered with depression and disassociation since the deaths of two people close to her.

(Dissociation is a way that the mind copes with too much stress or trauma. There are many forms of dissociation, but in general you feel disconnected in some way from yourself or the world around you.)

Robyn enjoys the benefits of talking with other young people who have had mental health issues at a peer support group that meets twice a month in Croydon.

The group was set up by fellow Fixer Nikki Mattocks, 20, who has herself suffered with a range of mental health issues since childhood.

'When I started to talk about my mental health problems, that’s when I realised I wasn’t alone and that there was a chance of me getting better. The message is that it’s okay to talk, it doesn’t make you weird.'

Robyn regrets that she kept her mental health problems to herself for so long and wants to break down the stigma that she feels is still faced by those struggling with their own inner battles.

'I think my mental health problems came to light when I was about 14,' she says.

'I was in high school and I just wasn’t really dealing with the stress properly. Back in school it was seen as a trend to say that you were depressed or like you had depression, so no one really took it seriously.

'I didn’t really talk about my depression until I went to college.'

Robyn and Nikki have made a short animated film with Fixers, aimed at 13 to 25 year olds, which focuses on the importance of sharing the way you are feeling with others.

They hope the film will encourage others to open up about problems they may be having with their mental health.

Richard Pacitti, the Director of Mind in Croydon, has praised the girls' work.

He says: 'The project that Nikki and Robyn are running is a really good initiative. There’s lots of evidence that connecting with other people is one of the most important things about maintaining our mental health and promoting good mental health.'

Nikki adds: 'Talking about what you're going through is a good thing - and other people are going to be there for you.'