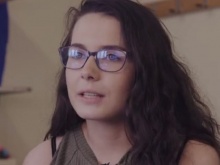 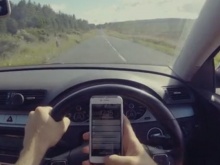 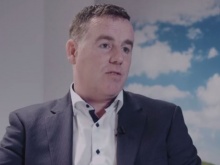 'At our age, texting is a big thing, that’s how we communicate with each other. If you’re sitting in a car and your phone goes off, your automatic reaction is to lift it up.'

Naomi McGill and Carla McCallion, both 17, are working with Fixers to show young people the dangers of texting while driving.

The pair, who live in Cushendall in County Antrim, have created a film to show the dangers of using your phone behind the wheel.

They told their story on UTV Live on October 5.

Naomi says: 'Just recently I passed my test. When I pick people up and take them home from different places they can be rowdy and trying to take photos and shouting at each other across the car.'

Carla adds: 'We're always on our phones, we're taking videos and pictures of each other and showing posts on the Internet and that can become distracting.'

They hope to show their film in schools and that it will be watched by other people their own age who are learning to drive.

Naomi says: 'We hope our film has a positive impact on young people who are driving and shows them that they can put away their phone. I hope it encourages them not to text and drive and makes them realise it’s not okay.'

The campaign is supported by Stephen Savage, a Safety Ambassador for New Driver NI.

He says: 'In most schools the question I ask is, 'Have you been a passenger in the car where the driver has been on their mobile?'

'Over 70% of students will raise their hands and say they’ve been in the car, so it is becoming more prevalent now, especially with young drivers.

'Their use of social media, their need for social media and texting is an everyday occurrence.'

Carla says: 'We really want people to take our message on board and just be careful in the car. Take responsibility and don't distract the driver, or be sensible and turn off your phone for that journey.'

This project has been supported by the Causeway, Coast and Glens Policing and Community Safety Partnership.