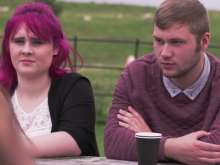 Georgia and Jonathan are warning young people about online dangers 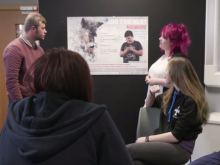 Georgia and Jonathan have been taking their posters into schools 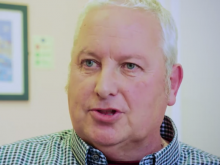 'When I was 16 I met with a boy to have consensual sex with him. I didn’t know that he recorded it.

Hearing about experiences like this inspired Georgia Goodman and Jonathan Hughes to launch a campaign warning young people about the dangers of online predators and sextortion.

The pair, who live in Cumbria, have created a poster with Fixers warning young people about online grooming and urging them to keep their privacy settings high on social media.

They discussed their campaign on ITV Granada Reports and ITV News Lookaround on October 5.

Georgia, 19, from Ambleside, explains: 'Our poster represents a boy thinking he knows the girl he's talking to, but she's got the shadow of a wolf behind her to represent that she's not who she says she is, and that you don't know who it really is if you're talking to a stranger online.'

Jonathan, 21, from Barrow, adds: 'A conversation online can start off by someone saying, 'Hi, how are you?' and quickly develop into them asking you for nude photographs.

'Sometimes with sextortion, predators will ask for a picture and then when the young person sends it they'll blackmail them with it. We want to make young people aware of the dangers.'

Iain McKay, NSPCC service manager, says: 'I think the eight to 13-year-olds need to have real concern. At that time parents are thinking about buying their children either a smart phone or a tablet or allowing them to be on the internet.

'Technology has come on leaps and bounds and we are probably a pace behind it all the time, so that makes it even more important that parents try to keep up-to-date.

'The safest way to protect your children in any form is to talk to them and be aware of what they are doing.'

The pair have been taking their poster into schools to help educate students.

Jonathan adds: 'We showed the poster in one school and afterwards one young person came up to a tutor and said, 'I need to talk about this subject'.

'It made me feel proud that I'd given one person the opportunity to speak out.'