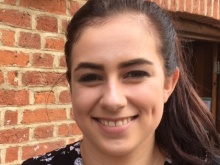 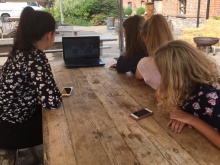 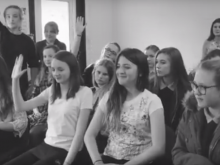 Young people in the film

Tired of being told their opinions don’t matter, a Herefordshire group are hoping to challenge negative stereotypes of young people.

Eighteen-year-old Nicole Barrow and her team from Ledbury, want to bridge the generation gap they feel exists in their town and show that others their age can make a difference if given the chance.

They’ve helped to produce a Fixers film which aims to change the opinion of some of the community’s older members, who often see them as a nuisance.

‘It can be extremely demeaning when people look at you like you don’t know anything,’ says Nicole.

‘I remember one time I was talking with my friend about Brexit and a woman came up to us saying we shouldn’t be talking about something we know little about.

‘I was shocked and felt really angry. Just because we’re young doesn’t mean we don’t have an opinion on serious matters.

‘While inspiring youngsters to believe that anything is possible, I also want this campaign to show elders that we do have a voice and it’s about time we are listened to.’

The group’s film is a parody of a TV news report, which turns the tables by having the town’s younger generation become community decision makers instead of their older counterparts.

Nicole, who intends to study History and Politics at university next year, believes that the media also has a role to play in changing the way that society views young people.

‘There are an awful lot of negative stories about others my age and, if anything, it makes the situation worse for us,’ she adds.

‘If we show the good work that young people can do, then it will rub off on others and they’ll stop looking at us with fear and take us seriously.’

The group hope to show the film to members of the town‘s council and also in schools.

‘Hopefully, people who are in power will realise that young people have views too and it’s in everyone’s best interests to listen to them.