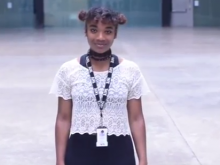 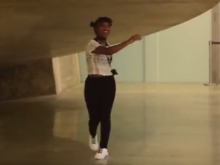 Zenisha has made a film with Fixers to spread her message 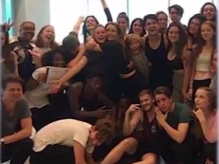 Zenisha with her JAGS classmates

A teenager from Camberwell wants to encourage self-confidence in young people and show them that if they work hard they can achieve whatever they want to in life.

17-year-old Zenisha Peterkin has created a film with Fixers to show how youngsters can create opportunities for themselves.

‘I hope the film shows young people that they can do whatever they want, regardless of where they come from,’ she says.

‘If you keep trying you’ll get to where you want to be.’

Zenisha tells her own story in her Fixers film, and explains how if she had put limits on herself at a young age she wouldn’t have achieved all that she has gone on to do.

At the age of 11 Zenisha set herself an important challenge – gaining entry to the prestigious James Allen’s Girl’s School (JAGS) in East Dulwich Grove.

‘My mum wasn't sure that I would get in, but I was determined to do it,’ she says.

‘It was really competitive and I think she was worried I’d get my hopes up and would be disappointed if I didn’t get in, so she wanted me to be realistic.

‘I spent the whole of Year 6 studying to get good marks in my SATs and passed the entrance exam, and received a bursary too.

‘Now I want to show other young people that you shouldn’t put limits on yourself – because if I had done that I wouldn’t have gone on to achieve all the things that I have so far.’

Zenisha, who plays the cello and clarinet, says that working her way through barriers and pushing herself led to great opportunities and allowed her to develop new skills.

She has since taken part in All About The Band – a programme run by Southwark Music Service – and joined the National Youth Theatre.

She feels there is a lack of self-confidence among young people and wants to stop this from holding them back.

She created her Fixers project with the help of Niomi Gibson, Golda Lee Bullock and Hiten Chauhan, who are all part of the Housing Association Youth Network (HAYN).

‘I think sometimes teachers can have misconceptions about young people and think ‘they’re not going to listen so there’s no point trying to help them’ and that can make them lose confidence,’ she says.

‘Sometimes parents also won’t encourage their children or put money into the things they want to do either, and they can spend their time being bored and not doing anything, which prevents them from opening themselves up to opportunities.’

Once she finishes school, Zenisha is still deciding if she would like to pursue a career in either performing or engineering.

She has a positive message to send to young people, and hopes to share her film both in schools and on social media.

‘You can aspire to be whatever you want to be, so don’t put labels on yourself. Keep your options open and keep trying,’ she says.

‘Believe in yourself and don’t listen to other people’s negativity.’

This project was supported by the L&Q London Housing Foundation.