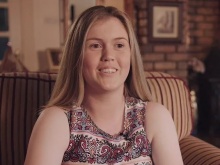 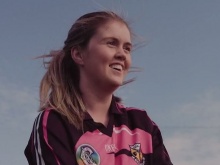 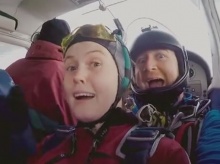 ‘Having a stoma or inflammatory bowel disease (IBD) shouldn’t stop you in any way.

‘It is tough but you’ll be able to do things that anyone can do and play sport or, even like me, be crazy and do a skydive!’

After years of battling a debilitating condition, Aneica Duffy, 22, has teamed up with Fixers to educate people about IBD – and show that it shouldn’t stop people living their lives to the full.

Her story was broadcast on UTV Live on Thursday, September 7th.

Always an active youngster – playing the female Irish team sport camogie from the age of seven – Aneica, from Foreglen in County Derry, started to feel run down when she was 16.

Tests revealed she had ulcerative colitis, a long-term inflammatory bowel disease which affects the large intestine.

‘I started feeling unwell leading up to my GCSEs,’ she says.  ‘I felt tired, I was so sick and I lost so much weight.

‘It was awful. I couldn’t go anywhere and I couldn’t do anything.  I was missing out on things with my family.  I was tired all the time and I was in pain.’

Undergoing surgery at 19 and again at 21, part of her bowel was removed and Aneica was fitted with a stoma, a pouch which collects bodily waste products.

‘The minute I got the operation the pain stopped,’ she says.  ‘There was a different sort of pain but I knew it was going to get better.  The pain I had before was just terrible.’

Aneica was determined to recover quickly and get back to the active lifestyle she was used to.

‘At times after surgery I felt down, I thought I’ll not be able to do anything again but with help from my family, friends and camogie team, I got back on track.’

Eight months after her first operation, Aneica ran a leg of the Belfast Marathon.

‘The atmosphere crossing over the finish line and the goal that I’d achieved will always stay with me,’ she says.

Then in October 2016, Aneica took part in a charity skydive to raise money for stoma nurses at Altnagelvin Area Hospital.

‘Aneica’s project is extremely positive and I think it will be quite inspiring to a lot of young people,’ he says.

‘Often people are fearful they could end up with a stoma as a result of their disease and they are worried about the impact it will have on their lives.’