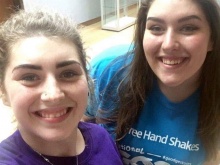 Emma and Toni want to highlight the risk of male suicide

An image from their powerful film 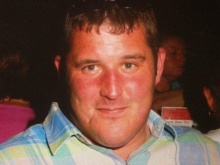 The girls lost their beloved father, Paul, to suicide

Hartlepool sisters Emma and Toni Rogerson were just 15 and 17 when their father, taxi driver Paul, took his own life two years ago. He was just 40 at the time – and usually full of life and laughter.

‘Dad always walked into the room with a joke,’ Emma, now 17 and a business student, recalls. ‘He loved barbecues, and adored karaoke, belting out Oasis and Bon Jovi.’

‘I was a real Daddy’s girl, we even had our own handshake!’ says Toni, now 19 and an engineering student. ‘He was just fun to be with, he lit up the room.’

It made Paul’s sudden suicide, in May 2015, even more of a devastating shock. Emma and Toni were left reeling with overwhelming pain, disbelief – and even anger at their father. But bereavement counselling, and support from friends and family, has helped them.

Now Toni and Emma have created a viral film, See The Signs – Save A Life, to raise awareness of the high risk of suicide among middle aged men.

‘We researched suicide and discovered that men make up 80% of suicide victims in the UK - and the group with the highest risk of suicide is men aged 40–44*,’ says Emma.

A recent study also showed that 42% of British men had considered taking their own lives at some point. A similar number admitted they never discussed their problems with anyone.** It was a familiar story.

‘Looking back, we can see that there were subtle signs,’ Toni says now. ‘Dad started acting a little differently, shortly before he died. He told Emma and I that he loved us. He wasn’t eating, he had very little motivation and was making excuses to get out of things.’

The girls were unaware that Paul had previously been diagnosed with PTSD (post traumatic stress disorder) after serving in the army, and had once been hospitalized with severe depression.

‘The night before he died, Dad came into my room and told me, "I love seeing you happy",’ Toni says.

The next morning, Paul had booked himself a doctor’s appointment, yet when his name was called out, he fled from the surgery. Concerned, the surgery contacted the family, who alerted the police. But tragically

it was too late – Paul’s body was found hours later. It later emerged, he’d left his wallet at home, turned off his phone and deactivated his Facebook account before setting off that day.

'We lost our grandad last year to cancer, but the grief is totally different. We were able to prepare and say goodbye,’ says Emma. ‘We never had that chance with Dad.’

The sisters’ viral film, follows a middle aged man who comes close to taking his own life, before being brought back from the brink by the two sisters. It was an emotional process.

‘Filming the scene in my flat, where we comforted the actor, was overwhelming,’ says Emma. ‘But when I saw the finished film, I was so proud I cried.’

Their film was launched at a Fixers event in Christie’s Auction House in London, introduced by broadcasting legend and Fixers president, Sir Martyn Lewis.

‘Toni and Emma have suffered a terrible personal loss at a young age, but have chosen to turn their tragedy into a national campaign, to try to help others and prevent others from taking their own lives,’ Sir Martyn says. ‘It was an honour to meet Toni and Emma.’

The film has since been aired at Newcastle Arts Centre to an audience of education, charity and

‘The most important way to help suicidal men of all ages is to get the message right. We should not simplistically be encouraging men to “be vulnerable” or to “open up”. These phrases can make a men feel an even greater sense of weakness or shame. It is much more effective to say “if you seek help you are strong because you are taking action”.

Emma and Toni hope that their message will now be spread widely across the country.

‘I really hope we can help to minimise the number of suicides,’ says Emma. ‘People don’t have to end their lives, to end a difficult situation. There is always help out there. I’d advise anyone who is suffering to open up - it’s not a shameful thing. You can cure a cancer if you catch it early, before it becomes terminal. It’s the same with mental illness.’

Although sadly it’s too late to save their father, Toni and Emma now hope they can pull back other men from the brink.

‘If we can save just one life,’ they both agree. ‘All this work and pain will be worth it.’