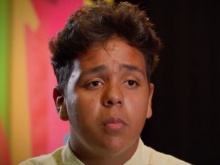 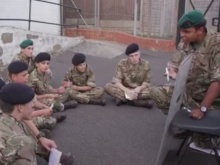 Kobe is a military cadet 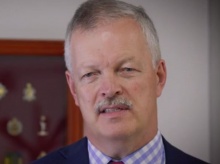 'I think a lot of people don't realise what military personnel go through when they are serving our country and how many of them suffer when they return home.

'I attend quite a lot of remembrance services and I don't like it when people fail to show respect to the military on these occasions. Some people treat it as a fun day out, like a trip to the zoo.'

17-year-old Kobe Still wants people to understand and appreciate what people in the armed services can go through on their return from military action.

So he has made a film with Fixers about a soldier who suffers Post Traumatic Stress Disorder (PTSD) after returning from serving abroad.

PTSD is an anxiety disorder caused by very stressful, frightening or distressing events.

Someone with PTSD often relives the traumatic event through nightmares and flashbacks, and may experience feelings of isolation, irritability and guilt.

His story was broadcast on ITV News Meridian (E) on Thursday, September 7th.

A military cadet since he was 14, Kobe first realised how difficult things can be for military personnel following an encounter with a drunk man at a bus stop.

He says: 'This old man came up to me, he was visibly drunk and my first instinct was, "I’m going to have to listen to this drunk until the bus comes".

'The man then revealed that he had served in the Falklands War, but his life had spiralled out of control on his return.

'He told me that he had been in charge of a section of ten or 11 men, but he had only come home with six of them.  It had left him with the burden of feeling like it was his fault. Quite understandably he’d taken to drinking because he had no support.

'Since doing this project I’ve found out that actually there’s quite a high percentage of homeless people and drunks that are on the street because of PTSD they developed after serving abroad with the military.'

Retired Brigadier Robin Bacon, from The Soldiers' Charity, is supporting Kobe and his project.

He says: 'I’m very impressed by Kobe’s project. He’s really raised awareness of PTSD and what’s it like being in the military. It is enormously important to have public respect for the military.'

Kobe hopes his project will encourage people to be more considerate towards veterans and military personnel who are currently serving abroad.

Kobe adds: 'When you’re going to remembrance services and going to military events don’t just see it as a family day out, see it as a chance to pay your respects to those who have gone out and fought for our country.

'These people risk their lives for our freedom. That’s not just a saying, it’s actually happening right now and when they come home they need to be supported.'