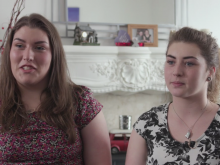 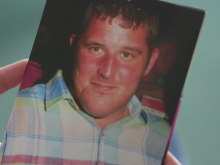 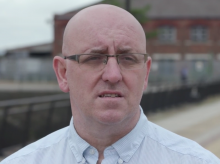 ‘Losing my dad was like, I've lost part of my heart that I probably won’t get back again.  You want to talk to him but he’s not there.'

Two sisters from Hartlepool, who lost their father Paul to suicide, are using their experiences of grief to try to prevent other people from taking their own lives.

Nineteen-year-old Emma, and Toni Rogerson, 17, have created a short film with Fixers to identify the signs of mental ill health so people can get help before it's too late.

Their story will be broadcast on ITV News Tyne Tees.

‘The night before my dad took his life two years ago, he came into my room and told me how much he loved me and that he wanted me to be happy,’ says Toni.

‘He deactivated his Facebook, he switched off his phone so we had no contact with him, and then we later got told that he had taken his own life.

‘We want to get the message out there to show people that there is help and that you aren’t alone.’

Emma hopes their campaign can help turn what’s happened to them into a positive.

She says: ‘Looking back, I now know that mental illness is an actual thing. I know that there are signs, I know that I need to be aware of these things with the people around me.

‘It’s been really hard for us to speak out, but it’s really important for us to bring something good out of something so devastating.’

Click here to read more about their story and watch their Fixers film.

Also featured in the broadcast is Neil Craig, Branch Director of Teeside Samaritans, who is supporting the sisters' project.

He said: ‘Suicide is the biggest killer of men under 50.  I think talking about suicide and helping people with their feelings is a really important thing.

‘It stops it being a taboo subject and makes it easy for people to get support because they know people are prepared to talk about it.’

Toni adds: ‘Nothing will bring our dad back but we want to make sure that people do not lose their love ones and that’s what matters to us.’