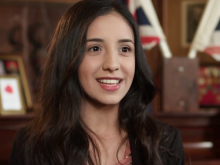 Ayesha Khan wants young people to get involved in politics 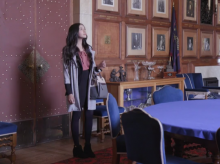 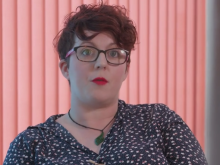 'I was always told you can be whatever you want and when I was very young and naïve, I wanted to be the Queen because I thought that was where the power was.'

17-year-old Ayesha Khan’s ambitions have changed since then. Now she wants to be the Chancellor of the Exchequer.

She’s already made some progress - in March she was elected Youth MP for her hometown of Peterborough.

One of her big concerns is getting more young people involved in politics.

'I realised there were burning injustices happening all around the world and if you want to make a change, politics is where you need to be,' says Ayesha.

She has made a film with Fixers, which was broadcast on ITV News Central and ITV News Anglia on Thursday, September 7.

Ayesha spoke with Jenny Weeden, Peterborough Council’s Youth Engagement Officer, and asked if she thought that progress is being made.

Jenny says that polls show that more 18-24-year-olds did vote in the last election.

She adds: 'I think that giving 16 and 17-year-olds the vote would be a great start. At the moment the government doesn’t have to write policies for teenagers and young people because they’re not trying to win their vote.

'So I think by doing that we would get more young people involved and engaged in politics.'

Ayesha says: 'My message to young people is that we live in trying times. Everything is at stake.

'Your future and your children’s future is at stake. That is why you should be involved, get engaged and be involved in politics to push your message across.'