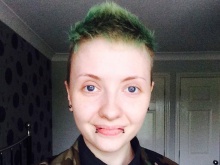 A school pupil from Livingston, West Lothian has made a powerful film to educate other students about the issues and challenges faced by transgender teens.

Working with Fixers, Matt Hood, 16, hopes that he can save other young people from the bullying and prejudice that he experienced.

Growing up as Vicky, Matt was haunted by the constant feeling that something was wrong – but he couldn’t describe why.

‘‘I knew that something wasn’t quite right but I didn’t know what.  The body I’m in doesn’t match the way I feel on the inside, this can feel very uncomfortable and difficult to deal with,’ he explains.

At 13, he began to experiment with wearing more masculine clothes and it just felt right.

‘When I was 14, I realised I was transgender – suddenly everything finally made sense.  A huge weight was lifted from my shoulders,’ Matt recalls. However, this was only the start of his transition.

‘I told my closest friends and wrote a letter to my parents, to explain that I was coming out as Matt.

‘Some friends were confused at first, as they didn’t understand what transgender meant. But we talked about it, and they Googled and read about it - then they agreed it was right for me.’

‘Now I’ve changed my name from Vicky to Matt, I’ve cut my hair, changed how I walk and lift weights. I’m ‘he’ and not ‘she’ and I feel so much better when I look in the mirror.’

However a group of local bullies who had already been harassing Matt now targeted their abuse on his transgender status.

‘One day there was a serious incident, with a group of students calling me names and throwing food and pencils at me,’ he says.

Although the school dealt with the incident, Matt believes education is key to tackling ignorance and prejudice. He made his Fixers film to educate schoolchildren so that they understand what it means to be transgender.

‘I want future transgender teens to know that it might be difficult at first with your family, or at school, but it will be ok eventually,’ he says.  ‘If we persevere, then one day people just won’t mind any more.’

For Matt, his future is bright. He hopes to begin hormone treatments soon and aims to complete an art degree after his A levels.  His Fixers film was recently launched at Edinburgh Pride festival, and his school intends to play the film to all students at a special assembly.

‘I just want other students to understand what transgender means. I’m not trying to stand out, or to be different. I’m just trying to feel comfortable and happy with who I am.’