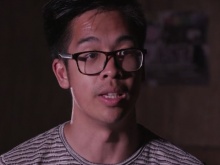 Duy wants to challenge racism in the LGBT community 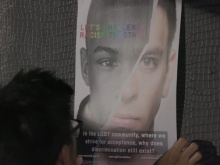 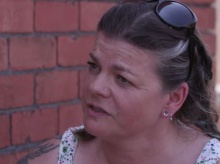 'There was a club where the owner, who is well known within the LGBT community, would call me a chink every time I entered.

'He would say 'the chink has arrived', and with the club being full everyone could hear it and would laugh and not really challenge that language.'

Duy Hoang is a 25-year-old gay man with a Vietnamese heritage, who lives in Bristol.

He has encountered racism – from the LGBT community – ever since he came out.

'It happens online too. You find individuals saying 'no asians, no fat people, no blacks,' he says.

Duy says it has massively affected his confidence.

'I’d go out with the fear that something might happen, that comments might be made about my skin colour.'

Fixers has helped Duy create a powerful poster campaign. He’s planning to put the posters up in gay clubs, pubs and meeting places to get his message across.

He told his story on ITV News West on July 6th.

He says: 'The main message is that we belong to the same community, a community that has gone through a lot of discrimination in the past – so you shouldn’t discriminate.'

Youth and community worker Michelle McMorrow told him she thinks it’s really important to challenge racism – online and in the clubs.

'I think Duy’s campaign is fabulous,' she says.

'Hopefully it will get discussions going and change some minds as well.'

Says Duy: 'I would be happy if other people don’t have to go through the experience I have gone through, so they feel comfortable going out and socialising with other people in the LGBT community, without fear of racism arising.'