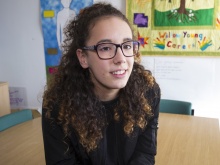 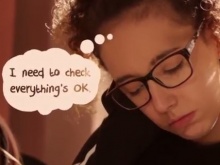 Chloe's film shows the worries a young carer can have 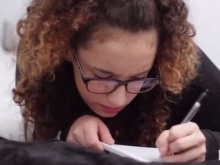 Chloe plans to share her film in schools and colleges

A young carer who has been accused of daydreaming in lessons when she was worrying about responsibilities at home is trying to educate teachers not to make snap judgements.

Chloe Reains has created a film with Fixers showing what it’s like to juggle being a student with a role as a young carer.

She recites a poem that she has written about the challenges that she faces.

The 17-year-old, who cares for her mum Jeanette, says that teachers have misunderstood her during her time at school.

‘Teachers would think I was daydreaming, but really I’d be thinking about how my mum was and if I’d remembered to book a doctor’s appointment for her,’ she says.

‘They would put it down to me not putting in the effort, instead of asking me what was wrong.’

At the age of 12, Chloe became a young carer for her mum – who was suffering from depression.

Jeanette was then diagnosed with breast cancer last year.

‘I need to help my mum with the shopping, cleaning and everything else around the house,’ she says.

‘The cancer has spread to her skull, spleen and bones and she receives an injection every four weeks.’

Chloe says having support in school has helped her and wants other young carers to be given the same.

‘I started to get help after I confided in a teacher I had known for years and broke down. I didn’t want to believe that I was a young carer and I didn’t know how to feel about it,’ she says.

‘I have more support at school now and there’s a teacher I can talk to when I’m stressed and upset.

‘I also take a lot of creative subjects, and it helps to have an outlet and write poems like the one that features in the film.’

Chloe, who lives in Leeds and is studying A-Levels at Pudsey Grangefield, plans to share the film in schools and colleges to help other students with caring responsibilities.

‘I think teachers need to be more aware of what life is like for young carers and offer more support for individuals,’ she says.

‘We’re worrying about everything around us – about our parents, siblings or other family members.

‘I want to show that young carers do care about school, but sometimes our mind is elsewhere and we need a little understanding.’