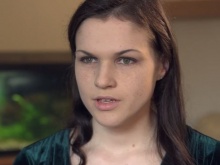 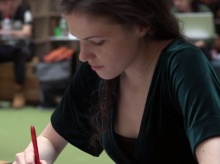 Harriet is studying medicine at university 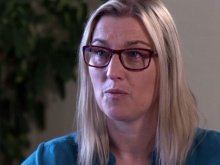 'Being trapped in an eating disorder makes you feel very alone and hopeless. At times I got so unwell my parents worried whether I would wake up in the morning.

'But the doctor told me he’d seen worse, and didn’t refer me. I ended up spending two years in hospital.'

After her GP failed to recognise her eating disorder in its early stages, Harriet Davis is calling for a better understanding amongst the medical profession, so other sufferers can get the help they need.

Her story was broadcast on ITV Granada News on June 8.

The 25-year-old, who is a medical student in Lancaster, explains how her disordered eating began.

'It started when I was about 14. I started dieting to lose a bit of weight for a holiday and it quickly escalated and became very restrictive,' she says.

'My mum took me to the doctor, but I was told that I looked fine and he’d seen a lot worse, which meant we were left fighting it on our own. I just got worse and ended up in hospital.'

With Fixers, Harriet has created a short film giving insight into some of the assumptions made about eating disorders, and the impact people’s words have on someone who is unwell.

'Eat something! What’s your problem? You don’t look like you have an eating disorder. Don’t you have any self-control? You’re so skinny. It can’t be healthy looking the way you do. It’s time you grew out of it.'

Harriet explains how she’s now able to view the problem from both sides – as a patient, and as a prospective doctor.

'Now that I study medicine I’ve come to recognise the strain and the pressure that doctors are under,' she says.

'But early intervention is so important and I’d like other people to be able to get help sooner, and have less of the physical and mental consequences.'

Shelley Perry, the chief executive of the local charity SEED Support and Education for Eating Disorders, is supporting Harriet’s campaign.

'There are over 70,000 people in Lancashire with an eating disorder at any one time. There’s an assumption that it’s about being thin, it’s about vanity - and it really isn’t.

'It’s a mental illness, so there needs to be a lot more understanding and a lot more education for GPs. It’s so important for that early intervention.'

Whilst recording with ITV, Harriet shows her film to a group of fellow medical students to get their thoughts.

Many were taken by the psychological insight into the condition.

One student comments: 'It really gets across the striking nature of what’s actually going on inside, which you don’t normally see.'

Another adds: 'It’s quite common in medicine, that you just start to see a condition rather than a person that it’s affecting and it really brought to light the person beneath the illness.'

Summing up her campaign Harriet says: 'If I manage to make a difference to even one doctor’s knowledge, or to one person’s experience, it would be good that I’ve made something of a bad experience and helped others have less of a difficult journey than I’ve had.'