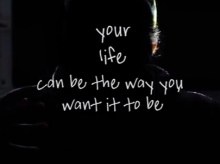 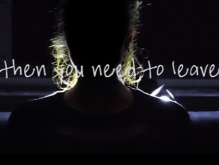 A pair of young people from Southampton has created a film showing domestic violence from two perspectives – someone who experienced it and the child of a woman who did.

Ben and Andrea, whose real names have not been used, want to show others who have been affected by domestic violence that it isn’t their fault, and encourage them to work towards a happier future.

Ben, 25, noticed his stepfather was abusing his mother when he was five.

‘Every time she fought back he would get even more violent. As I was getting older and growing up I could see how it was really affecting her,’ he says.

‘I would ask what was wrong and she’d say she was fine. Obviously as a mum, she was trying to keep what was happening away from her son.

‘He would always say that he would kill her if she didn’t let him back in to the house. I felt like I couldn’t say anything because if I did, my mum and I could end up dead.’

This had a huge emotional impact on him in the years that followed.

‘I’d end up blaming myself, locking myself in my room and not eating or drinking,’ he says.

‘My mum would have to bash down my door because I would barricade myself in my room. I have diabetes and she had to check I was okay, especially if I wasn’t eating.

‘I found myself spending a lot of time in hospital and ended up ill because of all the emotional pressure on me, and I wasn’t talking to anyone about it.

‘I kept thinking that maybe it was my fault, which led to me trying to self- harm and kill myself.’

Ben later moved out and began rebuilding his life.

‘I did a computer course at college and now I’m a qualified IT technician,’ he says.

‘It’s started to make me feel like my life can be how I want it to be, even if I didn’t have a very good start.

‘Maybe I was wrong and shouldn’t have moved out, because who else is going to protect my mum if I’m not there? But it’s important to remember it’s your life and not their's.’

Andrea, 25, also shares her experiences of domestic violence in the film.

‘After one incident my daughter woke me up from being unconscious. That’s when it clicked – I realised she shouldn’t have to do that, she’s only little,’ she says.

The pair hope the film will encourage those affected by domestic violence to seek support.

‘There’s so much help out there and I wish I’d taken it for myself from the beginning. A relationship should be equal, you should both be able to talk not shout, you should be able to feel safe around them,’ says Andrea.

‘If you’re not happy then you need to leave. After being put down for seven and a half years, I can finally accept who I am.