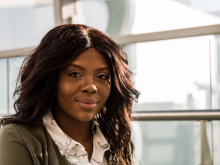 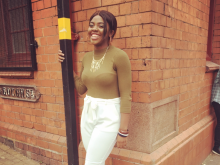 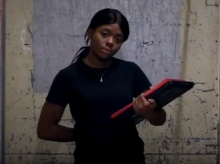 An aspiring counsellor wants all children living in the UK to be given the same opportunities regardless of where they were born.

Cynthia Tafrey, 20, is originally from Cameroon but moved to this country when she was five to join her mother who wanted a better life for her family.

She has made a film with Fixers to highlight how her dreams have been put on hold because of her immigrant status.

‘The UK is where I have lived and been raised for the past 15 years,’ explains Cynthia, from Birmingham.  ‘It’s the only life I have ever known.

‘As a child I assumed I could do anything when I grew up. I always saw myself as being just like my friends and thought I would be able to achieve the same as them in life.’

However, just one month before she was due to start university in Manchester, Cynthia’s world fell apart.

‘I had completed all my application forms and got the grades I needed,’ she explains.

‘I spent ages choosing universities and sorting my accommodation.  I went to all my interviews and got the offers I wanted.  I was ready for my future but then a letter arrived in the post which changed everything.’

The letter informed Cynthia that because her immigrant status is classed as ‘limited leave to remain’, she was not eligible for student finance.

‘My dreams were shattered and the future I had mapped out in my head was destroyed.  I was in a really bad place for quite a while.  I had to watch my friends all get ready to go to uni while quickly trying to find a "Plan B".

‘I felt so embarrassed and ashamed and a lot of my friends still think I simply changed my mind at the last minute about going.’

While Cynthia found an apprenticeship in the recruitment industry, she remained determined to do everything she could to appeal the decision.

‘While my friends were writing essays and completing projects, I wrote letters to my MP and the Queen asking for help but it didn’t get me anywhere,’ she says.

Her apprenticeship has now led to a job but Cynthia still dreams of becoming a counsellor, a career she says is impossible to achieve without completing a degree.

If Cynthia is granted ‘indefinite leave’ to stay in the UK, she says there is a chance she will be eligible to apply for finance to fund her degree.

However she wont be able to apply for this for another eight years and it is a lengthy, complex and expensive process.

In the meantime, Cynthia has made a film with Fixers to highlight how unfair she believes the system is.

‘I realised that feeling down about it and complaining wouldn’t change anything,' she adds.

‘I’m so grateful to Fixers for giving me the opportunity to speak out about this on a national scale.

‘Even if things don’t change, at least I will know I tried to improve the situation for young people in the same position as me by sharing my story.’