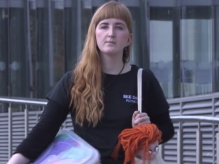 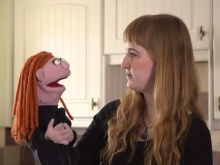 Bee says puppetry has helped with her depression and anxiety 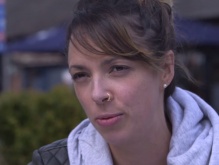 'I suffered a lot from depression which has led me to suffer from anxiety, and it was a tough time.'

Bee Daws, from Gloucester, first suffered depression when she was at university.

'I was feeling lost and unmotivated and like I wasn't worth anything. All those dark feelings were going through my head,' she says.

25-year-old Bee found a form of art therapy to help her with her feelings of anxiety and depression.

She turned to something she’s always taken pleasure in - puppets - to improve her mental health.

'Puppets are really good escapism - they're really fun and you don't have to worry about anything when you're puppeteering,' she says.

Now she is working with Fixers to help other young people talk more freely about their feelings by finding a creative outlet too.

The charity arranged for her to tell her story on ITV News West on June 8.

One particular puppet that helps Bee is Abbie.

'Abbie is a puppet version of me,' she says.

'She has all the best parts of me and she doesn’t have the depression and anxiety. So, through Abbie, I can sort of ask myself 'what’s the matter with me'?'

Puppets work for Bee, but she says that finding anything creative can be a great way for people to express themselves and improve their mental health.

Cat Taylor of the mental health charity Off the Record agrees.

'I think art therapy is a really useful way, particularly for young people we work with, to express what’s going on. Perhaps if they can’t express things in the traditional talking therapies,' she says.

'I think using puppets would be fascinating – another medium, particularly for younger age groups, to express how they are feeling.'

Bee adds: 'I think the most important message is for people to start talking about mental health issues whether that’s just by talking to each other, through puppetry or any other art form.'