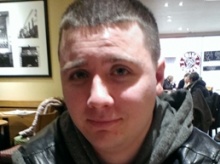 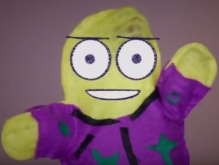 A man who struggled with dyslexia throughout school has created a light-hearted film explaining the learning difficulty to children and young people.

‘I want to help little ones who are in school at the moment, because a lot of people don’t know much about dyslexia,’ says the 25-year-old.

The condition can cause problems with reading, writing and spelling.

Ryan, who lives in Neath, experiences symptoms including words getting jumbled up, and he uses coloured overlays to help him read.

‘I had trouble in school and I didn’t have any help. It was a horrible time for me. I got bullied and called ‘dumb’ by other kids, they thought I was weird and didn’t want to hang out with me,’ he says.

‘I decided to appear as a puppet in the film to show the problems that I had.’

Although he always remembers having symptoms, Ryan wasn’t diagnosed with dyslexia until he was 16.

By that time he had already left school with no GCSEs because he couldn’t complete his exam papers.

‘I’ve used the puppet in the film to show what happened to me and how bad school was so that teachers and students can see what went wrong and what they should do better,’ he says.

‘I wish I’d had a chance to actually get more support.’

Ryan, who is now in the Army Reserves, plans to share the film in schools and colleges and hopes it will encourage people to get the support they need.

‘If you recognise any of the symptoms then please talk to someone. Dyslexia isn’t a bad thing, and with the proper support you can do anything.’