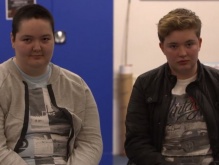 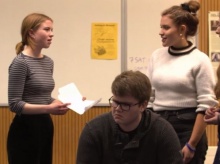 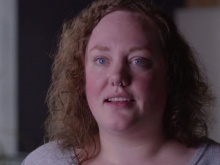 Lily Quantock from The Kite Trust supports the campaign

'From a young age we tend to put people into very separate categories. People think gender is pink and blue, when in reality it’s a spectrum of multiple identities and multiple experiences of how people view themselves and who they are.'

Amy Creek and Kieran Benito-Knight are working with Fixers to improve people's understanding of gender identity.

The pair, who are both from Cambridge, have been working with the Young Actor's Company to create performance scenarios about the issue, which they hope will educate others and challenge ignorant assumptions.

They told their story on ITV News Anglia earlier this month.

'The world identified us both as girls when we were born, however both of us have had completely different experiences when it comes to gender identity,' explains Kieran.

Kieran says: 'I was a very happy, well balanced child. However, once puberty set in, I suffered a lot from anxiety and depression.

'It took until I was around 18 or 19 for me to realise that all these problems where coming from the fact I was living as the wrong gender.

'From that point on I began the long and often difficult social transition, which included changing my clothes, getting a new haircut as well as coming out to my friends and family.'

Amy adds: 'I tend to view myself as gender neutral. I ask people to refer to 'they' and 'them' when referring to me. I don’t see myself as being a girl or being a boy.'

The pair hope their campaign will help to open up a dialogue about gender identity and challenge ignorant assumptions.

'I have witnessed the amount of hate that can come towards other trans people in the community and for me it is so vital that we get this education out there,' says Kieran.

'The internet has had a big impact in terms of young people and their gender identity. Previously they may have struggled with this internally for decades.

'Now they have better access to information and they’re able to look out into the world and say 'I’m not completely alone'.'

The project was supported by the Wellcome Trust.