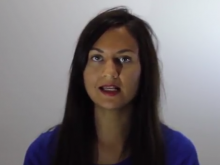 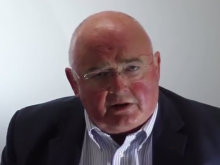 A young woman who was sexually assaulted by her own father for nine years is calling for mandatory reporting of child abuse.

Siobhan Pyburn was six or seven when her father began abusing her.  The abuse ended when she confided in her mother during the school holidays and the police were called, leading to his prosecution.

Now 26, Siobhan firmly believes that if people who work with children had a legal duty to report known or suspected child abuse, the horror would have stopped much sooner.

In a film she has made with Fixers, she says: ‘I found a comment on my blog some years after the abuse from my teacher.

‘She told me that one day at school I had been acting strangely. And when she asked what was wrong, I said I couldn’t tell anybody. I said that it was a secret and that I didn’t want to be left alone with my father. At this point alarm bells should have been ringing,' she says.

‘She told me in the comment that she didn’t feel it was her place to intervene and that back then there was no referral system in place. Nowadays although there is a referral system, it’s all discretionary, that means it’s optional, there’s no legal duty to report.

‘I know now that many of the years of abuse I suffered as a child could have been prevented if my teacher had not only noticed the signs but also acted by reporting to a local authority.’

Siobhan, from Southampton, describes how her father manipulated her when she was a child so that she did not tell anyone about the abuse until she was 16.

‘The main obstacle to me speaking out was feeling ashamed and responsible for the abuse. He was my father, so I trusted and believed him when he told me it was my fault.'

Siobhan lived between two households and rarely saw her mother, who lived and worked elsewhere. She was often left alone with her father.

‘Sometimes dad and I would go to a caravan by ourselves. It was there that he began touching me, but I was too young to realise it was a crime,’ she says.

She describes how her father manipulated her by rewarding her with computer games or CDs after every occasion.

‘He’d touch me first, so it felt like somehow I’d ‘earned it’. He abused me several times a week. I don’t recall him doing anything nice just for the sake of it. It’s all I remember of him from my childhood.’

Siobhan, who went on to study law at the University of Exeter, campaigns passionately against child sexual abuse through her social enterprise the Beam Project.

However she believes there is ‘one big institutional obstacle’ against those in favour of mandatory reporting – the NSPCC.

She says: ‘The NSPCC rejects mandatory reporting for a number of reasons. Firstly, they claim that children would be discouraged from reporting abuse because of concerns about being catapulted into a criminal investigation.

‘I can only speak for myself, but my biggest concern, as someone who was being abused, was for the abuse to stop.’

In response, Siobhan says: ‘If you have a thousand more reports and a hundred lead to the perpetrator being prosecuted and unable to abuse children any more, then I think that’s worth it.’

He says: ‘If we are going to say that we’re not going to introduce an effective child protection system because we’re worried about the effect of the services and agencies being overwhelmed, then we have to accept that the consequence is that we’re leaving children to be abused.’

Westminster officials have carried out a consultation on the issue and were due to publish their report in September.

In May 2007, Siobhan’s father, William Pyburn, then 74, of Hampshire, was given a three year prison sentence after being convicted of indecent assault.

He was convicted on 11 specimen charges of indecent assault, having sexual activity with a child and causing a child to engage in sexual activity. He denied the allegations.

Fixers is holding a conference about child sexual exploitation on Wednesday and will be submitting a set of recommendations to the Government later this year.