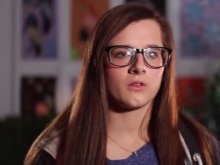 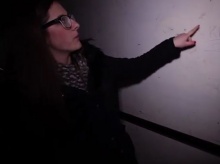 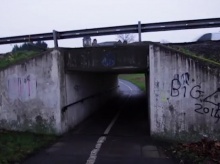 A notorious Stirling underpass that was the scene of a violent rape last year is still unsafe, say pupils from the nearby Wallace High School.

They have launched a video campaign with Fixers calling on Stirling Council to make more improvements to the Customs Roundabout underpasses.

The pupils say they are scared to walk through the underpass, which is just over a mile away from their school, on their own.

Morgan Williams, 17, says: ‘It’s terrifying to walk through there alone. I don’t feel safe, I always feel like there’s somebody behind me or something bad is going to happen.

'There’s no streetlights by the entrance so it gets pretty dark. I need to walk that way five times a week to get to a sports club at Stirling Indoor Bowling that I attend after school.

'After I heard about the rape attack I stopped walking through there on my own. I was really shocked about it - you don't expect to hear about things like that happening.

‘I already felt nervous because a few years ago an elderly man who was walking home through the underpass was attacked and unfortunately he passed away.

‘It was scary - I kept thinking that something like that could have easily happened to me.’

She was at an underpass near the Customs Roundabout in Stirling when he struck, pinning the young woman to the ground before eventually raping her.

At one point, he grabbed a piece of concrete and held it above her head, causing her to fear for her life.

Hours earlier, Robertson, of Saltcoats, Ayrshire, had already put a 22-year-old woman through a similar ordeal after grabbing her in the city’s Bridgehaugh Road.

She managed to escape before he could rape her.

Robertson, who has previous convictions for robbery, pled guilty to charges of rape and assault with intent to rape and was jailed at the High Court in Glasgow for eight years and eight months in May 2016.

Morgan says there are alternative routes but they can be dangerous.

‘There is a bridge that I walk over instead, but it’s a car bridge and the pavement is quite thin so there’s not a great deal of space for me to walk and it doesn’t feel very safe.

‘We want the underpasses to be a better and safer place to walk through so young people don’t take risks going a different way.’

He says: ‘I personally wouldn’t be comfortable with any of my kids walking down there and I’d even go so far as to say that I’d advise them to go a longer route to avoid it if they could. It’s not a nice area for anyone to go.’

Morgan and her team are asking Stirling Council to make improvements to the lighting and signage as well as providing clearly visible CCTV and an artistic mural which would cover up the graffiti inside the underpasses.

‘It would be good to get some better lighting and some more CCTV so that if anything does happen the police can see it, and a mural would brighten it up a bit,’ says Morgan.

The film will be shown to members of Stirling Council following their re-election in May.

'There's still a lot that needs to be done to make the underpasses safer, it's a horrible place to walk through,' says Morgan.

‘I hope they will see where we’re all coming from and how this affects us all, and make some changes so we can use the underpasses without being scared.’

A Stirling Council spokesperson said: 'As a local authority our residents’ safety is a key priority. Around £20,000 of lighting improvements were made at both the Craigs and Customs roundabout underpasses late last year, in support of a wider project to replace our LED lighting across the area.'