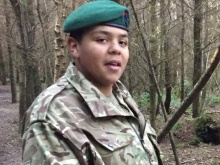 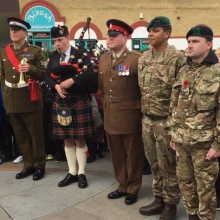 Kobe at a Remembrance Day service in Folkestone 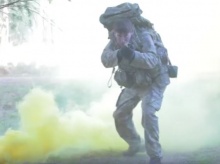 An army cadet from Folkestone is urging young people to have more sympathy for military veterans, because he believes youngsters do not understand how conflict can change lives.

Kobe Still, 17, has created a film with Fixers showing how a serviceman with Post Traumatic Stress Disorder [PTSD] struggles to return to civilian life.

‘I’ve been to a lot of remembrance services and I see younger people stand there and get bored – they’re not intentionally being disrespectful but they’ll start talking and messing around. This could upset veterans who have fought,’ he says.

‘Younger children can see these services as just a formality they need to sit through and I want my film to show them the impact conflict has on veterans and how important it is to pay our respects.’

Kobe, who joined the Kent Marine Cadet Force when he was 14 and is studying A-Levels at Dover Grammar School, says he also wants to draw attention to the problems that returning veterans may face, like alcohol or drug addiction.

‘I want to provide an insight into what veterans might have experienced.'

‘Once when I was sitting at a bus stop in my uniform an older man, who was drunk, came up to me and told me about how he’d fought in the Falklands and led a section over there and lost over half of them.

‘He said he felt responsible for their deaths and had had to tell their families that he hadn’t brought them home.

‘It really changed my perspective of him. If he hadn’t told someone that and people just saw a man drinking in the middle of the day, they probably wouldn’t have been very sensitive towards him.

‘Young people walking through town might be offensive towards veterans they see drunk on the street – but they don’t know what they’ve been through.’

Kobe hopes to share his film on social media and at public events like the War and Peace Show – a gathering of military vehicles which is held annually in Kent.

‘If it encourages just one or two people to really think about what veterans have been through, and to go along to remembrance services because they want to pay their respects, then that’s a win in my book.’