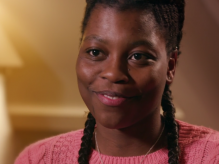 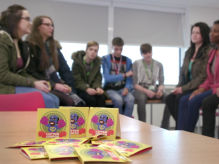 Students learn how HIV is contracted 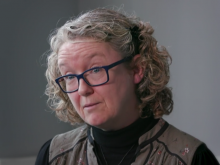 ‘HIV is something that’s impacted me personally. We had a nanny in Zimbabwe who contracted the virus and it was a great shock when she passed away. I think HIV is still a big problem in the UK too – I think it has been forgotten about and how there’s still young people suffering from it today.’

With Fixers she has designed a condom box containing information about how HIV can be contracted, to educate people about the virus.

Fixers arranged for Tariro to talk to ITV Granada News about her campaign.

Tariro tells ITV how after coming to the UK from Zimbabwe at the age of eight, she feels she didn’t receive enough education about HIV, compared with other sexually transmitted diseases.

The 20-year-old from Liverpool says: ‘What I know now, I definitely didn’t learn when I was at school. I think there generally is a problem amongst young people where we’re not educated about the virus as much as maybe older generations were.

‘I’d say it’s important to stop ignorance and stigma, I’d also say it’s very important for young people to know how to protect themselves and how to practice safe sex.’

To read more about Tariro’s campaign or to view the condom boxes, click here.

Tariro visited a local college to get feedback on the condom wrappers, and heard some of the misconceptions students have about the virus.

After reading the condom packet one student told her: ‘I thought that just by kissing somebody you could catch it, so without that information on the back of the packet I wouldn’t have known that it can’t be caught like that.’

Another student describes having learnt little on the subject at school: ‘We talked about STDs in the briefest of ways, and HIV was never talked about.’

Another adds: ‘To be honest I didn’t know what HIV was until I left school because no one ever spoke about it or told you how to protect yourself.’

She says: ‘Here in the North West there are over six thousand people living with HIV and that number is increasing every year.

‘Some of the misconceptions that young people have are that there’s a cure, or it’s gone away.

‘HIV is a lifelong health condition now, but unfortunately people don’t talk about it or normalise it because of the stigma that still surrounds it, so it’s just not being discussed.

‘People aren’t thinking about it - it’s not on their radar.’