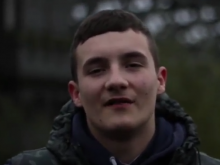 A teenager who nearly died after unwittingly smoking a new psychoactive substance, formerly known as a 'legal high', is warning of the dangers of taking unknown substances.

Shane Danino has made this film with Fixers telling how he ended up in hospital after a friend offered him a smoke.

The 16-year-old says: ‘It suddenly hit me and I was out of it; it was strange, like I was having an out of body experience.’

Shane doesn’t recall what happened next, but his sister came and found him and called an ambulance.

He says: ‘She was extremely worried. She later told me that I was crawling up a tree and barking like a dog, and then I had a fit.

‘One wrong decision almost destroyed me. I want to warn others not to take things when you’re not sure what’s in it.

Shane, who is studying music, plans to share his film in schools and colleges.

He says: ‘I see a lot of young people smoking around Manchester, so I want them to know what happened to me.’

This project is supported by Make My Day Better.