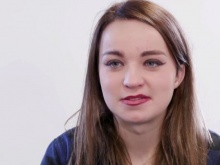 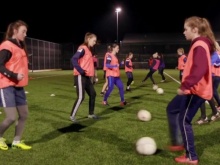 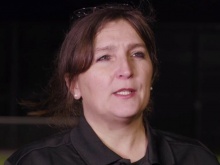 'Football means everything to me - I’m football mad, I can’t imagine life without it. But I find I have to justify myself to people because I’m a girl, and I don’t think that’s right.'

Fed up of not being taken seriously as a football fan, and seeing only limited publicity for the women’s game, Rosie Ward is calling for more recognition for women in football.

Her story was broadcast on ITV Border News on February 2.

The 18-year-old from Carlisle tells ITV how she got into football, before an injury meant she was relegated to the sidelines.

She says: 'I started playing when I was seven.  I was getting quite good at it.  But I got injured when I was 11 and I had to stop playing.

'That ruined my life at first and knocked my confidence, but I got over that and I now channel my passion and love for football just by watching it and going to the games and by talking about it every day.'

Rosie, who supports Carlisle United and Manchester United, is frustrated that the women's game does not receive the same amount of coverage as the men's.

She says: 'The men’s game is on television every single day and I don’t think that’s fair, because you don’t really see females playing football.

'The message I want to get across is that the girls’ game should be equal. I want more girls to play football.'

She says: 'The women’s game has moved on massively. I think you have to come with an open mind, not come thinking you’re going to watch men’s football or try and compare it because it’s a game in itself – it’s a very skilful game.

'You won’t see a lot of the simulation you get in the men’s game - women get tackled, get up and get on with the game.

'You do still get men who just think women shouldn’t be playing football, but I’d say come and watch it.'

Rosie's project was supported by the Wellcome Trust.