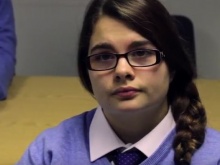 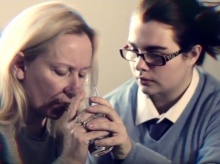 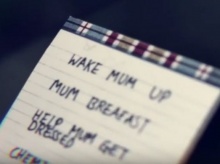 The film shows responsibilities young carers have at home

A group of young carers have made a hard-hitting film with Fixers showing how stressful it can be juggling responsibilities both at home and in school.

Jade Dyer, 17, has been the primary carer for her mum for the past four years and takes the lead role in the film.

It shows her being reprimanded by a teacher for failing to get an essay in on time as she struggles to look after her mum who has Grave’s disease – an autoimmune condition where the immune system attacks the body.

Jade, from Bourne End, Bucks, says: ‘Her illness means her moods can be very up and down – when she’s down I need to be there to console her and give her support.

'She might not be able to get out of bed if she’s feeling like that, so I’ll need to do the household tasks like cooking dinner.

‘If she doesn’t take her medication or is particularly unwell she becomes quite immobile, so if she collapses I need to be there to help her up.’

There were times when the teenager struggled to cope with school.

She says: ‘My secondary school attendance was very low, the teachers didn’t realise what I was going through so there was a huge lack of understanding.

'My grades were affected and teachers could be quite harsh about it.’

Jade, who is now studying for her A Levels at Henley College, hopes to show the film at teacher training events.

She says: ‘We hope the film will show teachers just how much we have to do – we have a lot more on our plates than the average student and getting some leniency when it comes to things like essay deadlines could really help us.

‘Anyone can be in a caring role and it’s important that teachers are patient and understanding so they can help them. There are a lot of intelligent people who could miss out otherwise.

‘Focus on what that child’s needs are and help them in any way you can.’

This project was supported by community foundation Heart of Bucks.