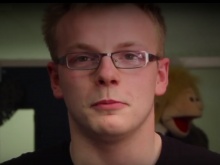 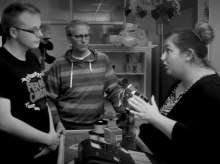 Stefan's film shows an example of being patronised 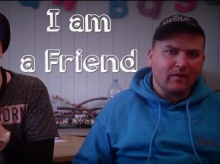 A man with learning disabilities wants people to stop patronising him after he went to buy something and the shop-keeper served his companion instead.

In the film he has made with Fixers, Stefan Clarke, 21, explains how he wants to be treated like everyone else.

He says: ‘My campaign is about challenging the negative and patronising attitudes people often display towards people with learning disabilities.

‘I want people to know that I’m more than capable. They shouldn’t make assumptions.’

Stefan, from Ballymoney, County Antrim, made the film with friends from a community support group who also report being treated differently.

He says: ‘Often when we are out and about in the local community, in shops, on public transport and so on we are viewed with suspicion, avoided or patronised.’

The film shows Stefan buying a candle and being spoken to in a condescending way by the shop assistant.

Watch it at the top of the page.

‘The example in the film of being patronised in the shop by a shop keeper is just one real life example of how I and others in the group have been treated poorly by people,’ he says.

‘We hope this will challenge people watching it to think about how they engage with others.

‘People need to know that they shouldn’t talk down to us or deal directly with a support worker instead of us when they interact with us.’

Stefan and the group plan to share the film online and hope it makes people aware of how much they're capable of doing.

‘I want people to know that I am more than capable and they shouldn’t make assumptions about me.’

Stefan's film was launched during an interview on Q Radio and shared online.

Janet Schofield is the director of CAN - a user-led charity for people with learning disabilities.

She said of the film: 'This is yet another great resource from Fixers which shows the capabilities of people with learning disabilities.

'Hopefully it will make a significant impact on people who watch it and encourage them to see everyone for who they are and what they can do, not what they can't.'