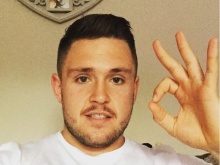 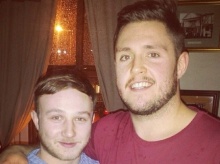 An Irish international rugby league player is tackling the problem of male depression after his brother-in-law committed suicide.

Luke Ambler says that boys are frequently told they should ‘be a man’, which stops them from talking about their feelings, so with Fixers he has created a short film challenging this perception.

Luke was devastated when Andy Roberts took his own life last April at the age of 23.

He says: ‘There were no signs that there was anything wrong. It was a shock to us all. He just went ahead and took his own life out of nowhere, out of the blue.

‘He hadn’t been acting strange or differently. He was just a normal guy, a brilliant dad who loves his daughter and enjoyed playing football at the weekends.’

The 27-year-old says: ‘He was at our house on Saturday, he played football as usual on Sunday before spending time with the family, and then on Monday night, he killed himself with no explanation.’

Since the tragedy, Luke has been on a mission to challenge the stigma concerning men and mental health problems.

He says: ‘If there’d been somewhere that Andy could have gone, I think he would be alive now.

‘I think at the time he probably didn't feel like there were people we could talk to, even though there were.

‘Men think that they can’t show any weakness because they don’t want to be a burden.’

And Luke should know. As a player in this year’s Rugby World Cup and member of the Halifax squad, he’s used to being in a macho environment.

He says: ‘Men put on a front, even when they’re not okay, because they think that they have to be strong all the time and not show any weakness.

‘We have a WhatsApp group which is nicknamed the Lion’s Den, because if you post anything soft, you get torn to pieces and it ends up being turned into banter.

‘That’s what I’m trying to change. I want to break these barriers down so that men don’t have to put on a front all the time.

‘I have a little boy who is seven, and I’m always telling him that it’s okay to talk about how he’s feeling and it’s okay to cry.’

In the two-minute Fixers film, a father is seen telling his little boy that men don’t cry.

The message is something that the boy takes with him as he grows into an adult.

Luke says: ‘It’s just typical of what boys grow up with. We need to change this. Parents need to tell their sons that it’s okay to be upset.’

While it won’t bring Andy back, he hopes it will prevent the story from repeating itself.

He says: ‘If I can help just one man, then Andy’s life won’t have been in vain.’