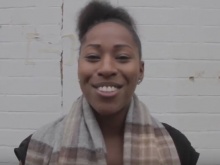 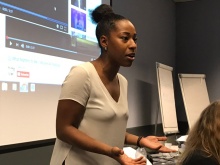 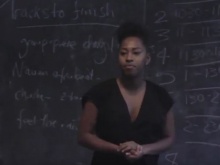 Azzees stars in the Fixers film

A woman who believes that politics is entrenched in every aspect of daily life is encouraging young people to make a positive difference to society.

Azzees Minott has made a film with Fixers showing the ways people can harness aspects like volunteering, the media or sport to be political and make changes.

Azzees, who lives in Upton Park, London, hopes the film will inspire youngsters to take action and benefit their communities.

‘For some people politics has become a dirty word, used to describe something that’s untrustworthy or complicated, but it really shouldn’t be like that,’ she says.

‘I think that feeling has been growing for quite some time and things like the MP expenses scandal have knocked people’s confidence.

‘But everything that we do and even the things we use have in some way been affected by politics – from the clothes on our backs to the cost of our travel and even the subjects we study.

‘We are constantly engaged in politics but I think some young people don’t realise the role they play.

‘I want to show them that you don’t have to work in politics to influence policies, you just need to find what you’re passionate about and create change,’ she says.

The 24-year-old, who studied international relations and politics at Coventry University and now works as a civil servant, was inspired to start the campaign after standing as an MP in Warwick and Leamington last year.

‘I stood as a general election candidate for the Green Party in 2015, and when I spoke at hustings I noticed that there weren’t many young people involved, and that there were some who didn’t know about different political parties and how they could influence policies,’ she says.

‘As much as they cared about the issues at hand, they didn’t feel enabled enough to do something about them. I made the film with Fixers because I wanted to empower young people.’

She plans to share the film on social media, blogging platforms and at educational workshops.

‘I hope it helps the next generation become more engaged in politics,’ she says.

The film was launched at the Action For Change – Girlguiding London and South East England Inspiration Weekend on November 26.

The event, which aims to encourage young girls to become politically aware, was attended by some 200 people.

One person at the event commented: ‘It was really interesting and inspiring. The message was something I really liked and agreed with.’

Stephen Fenning, Young Person’s Coordinator for Fixers, says: ‘The Girl Guides have said that they will be using Azzees’ film in future sessions, and we are also planning to show it at a school assembly next year.

‘Azzees has gained a better understanding of social campaigning and has enjoyed working with Fixers.’

This project is supported by L&Q London Housing Association.