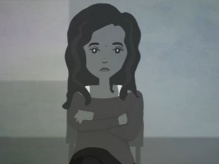 Kirsty is warning youngsters about the dangers of sharing explicit photos 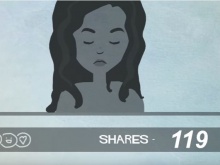 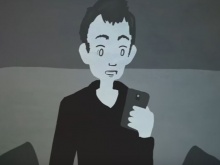 Kirsty, whose real name has not been used, was filmed without her knowledge after she was groomed by an older man who lied about his age.

He then threatened to post the video online if she did not do what he wanted.

The 17-year-old, from West Yorkshire, says: 'We started talking on Facebook and after a couple of weeks we agreed to meet up. He told me he loved me.

'I thought he was 18 but later found out he'd lied about his age and is actually in his twenties.

‘We slept together and he filmed me without my knowledge.

'He threatened to send the film around to people if I didn’t do what he wanted and he put it up online and sent it to his friends.’

Kirsty explains how the threats caused her to feel anxious and depressed.

She says: ‘I was devastated, I couldn’t cope. But I told the police and my youth workers and I'm getting support - they've been brilliant.

The person who shared the film was arrested and is being prosecuted.

She hopes the animation will shine a light on the potential dangers.

She says: ‘I hope the film shows young people that if this happens to them it’s not their fault and it’s the other person who should be in trouble, not them.’