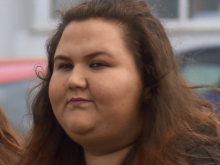 Jazmine wants others to feel happy in their own skin 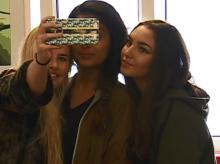 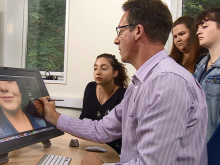 The team see how images can be digitally altered

‘It's hard today to find a girl who is completely happy with the way she looks. I believe that girls should focus on how their bodies will feel comfortable to them.’

A young woman who is critical of the unrealistic standard of beauty depicted in the media, wants people to be happy in their own skin and stop comparing themselves to what they see in magazines.

Jazmine Ireland, from Aberystwyth, is concerned that digitally enhanced images of celebrities can be damaging to young people who feel pressured to look a certain way.

With Fixers, she is raising awareness about air-brushing and will appear on ITV News Wales on Thursday, February 2, between 6:00 and 6:30pm, talking about her campaign.

She says: ‘Everyone's comparing themselves to people they see on the covers of magazines or on TV and that's not who real people are because they've been altered.

‘So why should normal women have to compare themselves to these women?’

The group carried out a survey with girls at their school and found that those who were older, tended to be more body conscious.

She says: ‘There's a lot of pressure on young women about appearance. There's this idea that we always have to be in transformation, improving our bodies in one way or another.

'Part of that comes from looking at images which show perfection almost like it’s normal.

‘Therefore you get lots of people working really hard on their appearance to try and create that image which, as Jazmine's shown, is often created on the computer.’

Jazmine adds: ‘I hope my project will help girls stop comparing themselves with unrealistic pictures in the media.

'Hopefully one day we will see women who are curvaceous, have crazy hair, imperfect skin, and their teeth not straight, in magazines and on TV.’