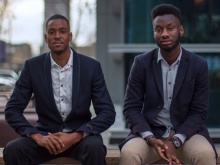 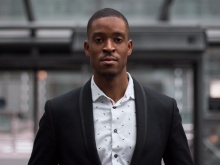 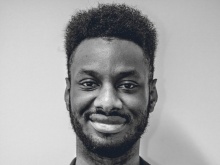 Two friends from London have made a short documentary with Fixers urging young people to pursue a career that makes them happy.

Michael Makinde, 25, recently left a job as an IT analyst at Lloyds Bank to pursue his dream of setting up a social enterprise to help young people find jobs with friend Efosa Omorogbe, also 25.

He says: ‘When I was growing up I was very unsatisfied by the lack of opportunities with regards to discovering what you are passionate about.

‘People forget what they are interested in.  Sometimes it’s down to that particular person’s infrastructure or the level of encouragement they get.’

Efosa Omorogbe, who is a graphic designer, agrees.

He says: ‘Lots of my friends at university were miserable and saw themselves heading down very mundane routes.

‘We wanted to ask the question ‘why is it that society forces people to forget their dreams and aspirations as kids?’’

‘We hope the film will show people that no matter what age they are, they don’t need to forget their passion.’

The film looks at how the lives of different young people have panned out.

Rosie tells how she wanted to be a dancer when she grew up, a dream that wasn’t supported by her family.

She says: ‘When I was a teenager I loved setting up a camera in my bedroom and filming my own dance videos.

‘I was told I should choose something sensible like accounting, plus, I was told I didn’t have the body of a dancer.’

Rosie went on to become an accountant, a decision she regretted.

She says: The world of finance bored me so much.

‘One day I decided to post my dance show reel online. A local dance studio saw it and got in touch. Two years later, I’m their choreographer.’

Tony explains how his life was going nowhere when he ended up in prison.

He says: ‘My passion has always been to write poetry and to work with young people.

‘I grew up in London and I was always around people who were into violence, which got me into a situation where I was put into prison.

‘I looked at my life – and questioned everything. At first I almost gave up.’

Tony decided to rediscover his creative talents, which eventually paid off when he landed himself a radio show.

He says: ‘I realised that if I could just break through and do what I wanted to do with my life – poetry – then I could influence other young people to step away from the decisions I made.

‘I lost a lot of hope. But even though there was an obstacle, my dreams were still a possibility. And they became a reality.’

Michael and Efosa have founded TiTo (Talent in Talent out), an app which helps young people find jobs they are passionate about.

Michael says: ‘We created Tito because we believe there needs to be a better way for young people to create their dream job and chase their passions.’

This Fixers project was supported by The Arsenal Foundation.