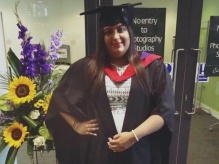 The stickers encourage young people not to make bad decisions which could impact on their future.

The group hopes their campaign, which is aimed at young people between the ages of 15 and 20, will warn them about the consequences of crime.

She now works as a detainee custody officer and enlisted the help of Trusha Nayee, Riddi Sheth and Nimisha Shanker for the Fixers campaign.

The 20-year-old says: ‘We hope these stickers will warn young people about the effects of crimes and serve as a deterrent.

‘We want to raise awareness about the consequences of crime and the impact that crime has on the life of the community in our local area in Crawley, because our family and friends have been victims of burglary and other attacks.

‘We want the people committing these crimes to understand how what they are doing affects everyone and hopefully promote a safer community.’